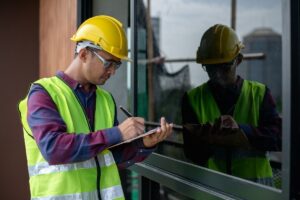 2 min read July 2021 — A countywide audit of building structures has already marked dozens of buildings for needed repairs. The audit was announced on June 26th following the partial collapse of Champlain Towers South, a 12-story condominium building in the town of Surfside, in northeast Miami-Dade. The audit is expected to be completed in 30 days.

Hundreds of buildings are expected to be inspected over the coming weeks, with two dozen buildings having already been “red tagged” by the county, two of which are owned by Miami-Dade. Little River Plaza, a five-floor apartment complex at 8255 Northwest Miami Court with a lighting issue, and Ward Tower, with 15-floors, at 2200 Northwest 54th Street, reported Local10 news.

City officials in North Miami Beach ordered the evacuation of the 156-unit Crestview Tower last Friday. The structure was built in 1972. While an initial report noted that the building was unsafe to live in, the condo board had a second inspection done determining the building safe to live in while repairs were made. The survey has since been rejected by the city as the documents were not in compliance with the 40-year recertification process, prompted by the countywide audit in the wake of the Surfside Condo collapse.

The audit will continue even as the search around the rubble of Surfside’s Champlain Towers has shifted from search and rescue to recovery. Emergency workers have spent over two weeks pulling apart the rubble, signaling that the efforts to find survivors has ended. At a news conference Wednesday evening, Miami-Dade Mayor Daniella Levine Cava called it an “extremely difficult decision.”

The audit is being conducted by the Department of Regulatory and Economic Resources with a focus on residential properties of five stories or higher that have reached their 40-year recertification point but have not yet completed it. While dozens of buildings have already been inspected, more remain.

While the audit continues, counties across Florida may be reconsidering their own inspection processes. Of the 67 counties in the state, only two, Miami-Dade and Broward, have a 40-year recertification and inspection requirement. Miami-Dade implemented its process in 1975, following the collapse of a Downtown Miami building in 1974, killing seven people and injuring 16. Broward County followed suit in 2005, modeling its own certification and inspection process off of Dade County’s.

Boca Raton Mayor Scott Singer said the city would soon propose its own building recertification process. While specific details remain unclear, Singer said the routine inspections would be for buildings newer than 40 years old, according to the Palm Beach Post. “Our building inspectors continually review and respond to issues that arise. From time to time, they’re on site and see issues and follow up with the condo association,” Singer said in a statement to the Palm Beach Post. “This would create a more tracked and formalized process.”

In the Town of Palm Beach, officials have encouraged condo associations to undertake structural and electrical evaluations of the buildings they run, as well as all safety conditions. “We remind you that Florida Statutes stipulate that condominium associations are responsible for maintenance of the common elements of the condominium property and that associations may be found liable for non-exercise of its powers,” the town said in a letter, according to the Post.

Back in Miami-Dade County, Miami-Dade State Attorney Katherine Fernandez Rundle announced that a grand jury has agreed to look into the collapse, saying that whatever the jury decides at the end of the process may have implications nationwide.

Photo by eric ellis on Unsplash