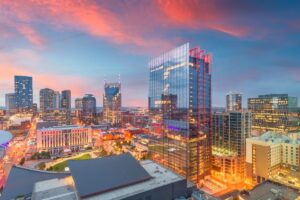 Cooper unveiled an ambitious agenda and increased support for the city with groundbreaking investments in education, emergency response, affordable housing, homelessness prevention, and city services. The priorities remained similar to the previous year and included improving salaries for public officials, record investments in human infrastructure and an increased urgency on housing affordability.

Addressing climate change, a key agenda issue globally, Cooper also set a goal for an 80% greenhouse gas emissions reduction by 2050. The creation of the Office of Music, Film, and Entertainment was another highlight.

The State of the Metro address laid out the mayor’s vision for Nashville’s future, his policy agenda and also his budget priorities for fiscal year 2023. The budget is set to be released in the coming days. According to a press release, the budget proposal contains “hundreds of line items necessary to fund the Metro government for the next fiscal year.”

“As we grow, we must do so in a way that works for every neighborhood, and make sure no one gets left behind. That requires investing alongside our growth and innovating to keep pace with the challenges presented by the growth. That is our vision,” said Cooper.

Additionally, Cooper announced that for the first time the city will provide paid family leave to all metro Nashville education employees.

The improvements for the city go beyond budget increases, with an effort to provide all-encompassing solutions that link mental health, crime reduction, housing affordability and homelessness. Cooper said he plans to drastically reduce homelessness with the assignment of $50 million for affordable housing from the American Rescue Plan. Over the past three years, Cooper has devoted over $150 million to housing affordability alone.

Another notable announcement was the addition of 157 new emergency response personnel to “bolster community safety,” which includes 46 more police officers. The increase in personnel goes alongside a new 9th police precinct in Southeast Nashville, which is set to break ground next year.

The culmination of the 59th State of Metro Address highlighted Nashville’s need for an increased budget following years of “crisis” restrictions caused by the COVID-19 pandemic and tornadoes. Like many southern areas, Nashville has experienced rapid growth following the pandemic.

The address took place for the first time in Antioch’s Southeast Community Center, outside of the city’s core center. The press release and summary of the Address can be found here.