Conventions make their way back to Orlando this summer

Conventions make their way back to Orlando this summer 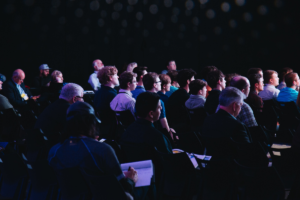 2 min read June 2021 —  After what was a sour cycle for the industry over the last year, rising demand for conventions has Orange County turning lemons into lemonade. The Orange County Convention Center is gearing up for a busy second half of the year as cancelled shows make their way back to the Orlando market. Sporting events and trade shows will be the lion’s share of returning events at the convention center, signaling a return to a semblance of normal while generating millions of dollars of economic impact for Orange County in the process.

Throughout the pandemic, the convention center has successfully hosted more than 100 conventions, trade shows, and sporting events at limited capacities since last July while simultaneously serving as a COVID-19 testing and vaccination site. The convention center is expecting to host about 15 events in June with many more rescheduled events returning back to Orlando, convention leaders say. “We have about 15 events scheduled for the month of June,” Orange County Convention Center Executive Director Mark Tester told Fox 35.

Reportedly, 78 shows were rescheduled due to the pandemic with 59 of them returning to Orange County this year. The convention center is looking to hire approximately 150 part-time workers to meet the rising convention demand.

It is estimated that the average attendee spends $2,567 locally when visiting the region, Tester told Invest: in a previous interview. “It shows we are an economic driver supporting 1,200 businesses and over 29,000 people working in our industry,” he said.

Moving forward, the center is considering several capital improvement projects to ensure their spaces meet the needs of event planners and participants, Tester told Invest: in a previous interview.  “With the pandemic’s impact on our business, we have all hands on deck to hit the gas pedal on cleanliness and disinfection protocols. We are also looking to implement our North-South Building expansion plan, a $605 billion project that is close to hitting 30-percent design,” he said. “The project is divided into two parts. The Convention Way Grand Concourse expansion includes an additional 60,000 square feet of meeting space and an 80,000 square foot ballroom along with a new entry to the North-South Building along Convention Way. It will provide the capacity to cater to different markets that the buildings cannot accommodate now. The Multipurpose Venue brings an additional 200,000 square feet of contiguous exhibit space in the South Building. It will incorporate connectivity between the North and South concourses. This venue will grant us the ability to welcome extremely large general sessions, plenary sessions of 10,000 to 20,000 people in one place.”

Photo by Headway on Unsplash