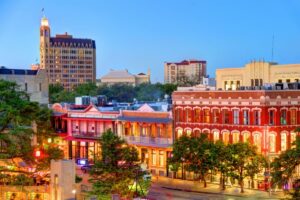 2 min read March 2022—  A recent study by Stessa shows that the San Antonio-New Braunfels metropolitan area had a loan approval rate of 81.4%, which is about 5% lower than the national average. Despite the lower rate of mortgage approvals, San Antonio’s housing market has stayed red hot.

In addition to a lower rate of approval, the loan amount approved was also lower, with the national loan approval median at $235,000 compared to $205,000 for the San Antonio-New Braunfels area.

The pressure on mortgage approvals in San Antonio also comes as the Federal Reserve launches a series of interest rate changes designed to tame the worst inflation rates the United States has seen in four decades, with the Fed approving its first interest rate hike since 2018 and broadcasting plans to raise interest rates six additional times this year. The members of the Federal Reserve voted Wednesday to raise benchmark federal funds by a quarter percentage point to between 0.25% and 0.5%.

Last Thursday, interest rates rose above 4% for the first time since May 2019, according to data released by Freddie Mac. Interest rates had previously hit a record low of 2.65% in January 2021, the Wall Street Journal reported.

“The outlook over the next three-to-five years will probably depend a lot on the administration in Washington, D.C., since we do business in all 50 states and need to gauge how the decisions being made will either have positive or negative impacts on our various divisions. A lot of people do not take that seriously. We do. We have to because we have to know where mortgage interest rates are going to go. We know they are going to start going up in 2022,” Amato said.

And as interest rates go up, at least some buyers will begin to be priced out of the market, easing competition somewhat. Additionally, other factors are expected to cool the housing market in the coming years, including new builds. The Mortgage Bankers Association said mortgage applications have already hit a two-year low across the country, with its Market Composite Index, which measures mortgage application volumes, falling to 13.1% in February, the lowest since December 2019, according to Reuters.

“I believe the pace is unsustainable,” said Tom Romanello, vice president and senior loan officer at Legacy Mutual Mortgage in an interview with Invest. “We can’t have double-digit increases in prices forever. I’ve been in the business for over 20 years, and we’ve been through several cycles, many of them similar to the characteristics we have now, so I wouldn’t worry much. We are experiencing high demand with very limited supply, which leads to a very strong market. It is not like it was in 2006-2007, when places like New York and Florida had a very hard time. In contrast to the past decade, we have better sustainability when factoring in jobs, and the guidelines to monitor income, assets and credit are tougher than they were years ago and make for a better scenario.”

Despite all of this, the area’s housing market was ranked the top housing market in Texas and the No. 4 hottest market in the nation for 2022, a study from Zillow showed. The study looked at metrics including appreciation, available housing inventory and the number of home-owning households.