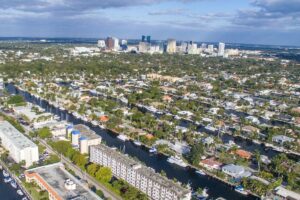 2 min read March 2022 — Broward County is getting its first people-mover project to shuttle travelers from the Fort Lauderdale-Hollywood International Airport to the cruise ship terminal at Port Everglades and even to the Broward County Convention Center. It’s one example of the moves afoot to keep up with the region’s population boom.

Florida’s Department of Transportation has earmarked an initial $12.5 million investment for the several-phase project — which will have a total project cost of about $600 million — to study the potential design of the system, according to the Sun-Sentinel.

“We need to grow and operate this airport within a limited space, so a lot of attention is paid to mitigating congestion on roads and developing more parking capacity to accommodate the growth in passenger levels,” said Mark Gale, CEO and director of aviation of the Fort Lauderdale-Hollywood International Airport, in an interview with Invest.

The airport people-mover is expected to be an elevated tram or system, similar to the monorails seen at Disney World, according to City of Fort Lauderdale documents.  The project is planned for between 2024-2028.

“One enhancement I am very excited about is our plan for an intermodal center, or IMC, at the entrance of the airport. This facility would connect travelers to every part of the airport from terminals to parking. We have been in discussions regarding the potential development of a commuter rail connection to the IMC, as well as a connection from the IMC to the Port Everglades seaport and ultimately to the Greater Fort Lauderdale/Broward County Convention Center. That will seamlessly connect three economic engines and would provide travelers unrivaled accessibility,” said Gale.

The people-mover project is one of several being planned in the Greater Fort Lauderdale area, and in South Florida, as the population continues to boom, and city and county officials race to keep up with the infrastructure needed to support the growing population.

“We have some transportation issues and challenges that we’re working through. We’re going to have to tackle these issues as a community as we move forward,” Michael Udine, mayor of Broward County, told Invest: in an interview. “The good thing is that we have major opportunities as a county: we are located in a region of the country that is very desirable right now. South Florida is the place to be, with multiple businesses that are looking to call Broward County home.”

Dean Trantalis, mayor of the City of Fort Lauderdale, told Invest: a key project moving forward is putting in a commuter rail line between Miami and West Palm Beach, passing through Fort Lauderdale. However, a challenge presented by the project is making sure the line does not increase congestion for street-level traffic downtown and that it does not negatively impact the marine industry on the New River.

“So, we’re looking to build a tunnel through the middle of the city that’ll allow the local commuter line to go through the city without interference. These projects are great opportunities for us to move forward as a 22nd-century city,” Trantalis told Invest.

Regional projects on the books include the Port Everglades Master Plan, which has identified 50 projects over the next 20 years, with costs up to $3 billion, city documents show.

Additionally, South Florida will receive at least some of the funds headed Florida’s way from the federal Infrastructure Investment and Jobs Act, passed in 2021. Officials have said priority projects for federal funds will include climate resilience projects, including wastewater treatment plants and roadway improvements, as well as mass transit corridors in South Florida, according to the South Florida Business Journal.