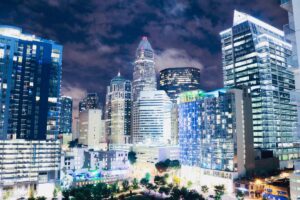 2 min read June 2022 — With a diverse group of venues that make the Queen City a music haven, Charlotte has always been known for having great musical offerings. But the live music industry has experienced its fair share of setbacks since the pandemic. Fortunately, this summer should be music to the industry’s ears – quite literally.

According to Arts North Carolina, 96% of organizations in the arts sector had to cancelopens PDF file events in 2020, with more than 6 million lost in attendance across the state.

In the coming months, the city’s live music scene will see a resurgence, including major acts like Garth Brooks performing at Bank of America Stadium on July 15 and Wiz Khalifa and Logic taking over the PNC Music Pavilion in mid-August.

“People are hungry to get back to live music, which is what we are all about, and we are already seeing a great return of audiences, including sellouts. For some of our big programs like “Star Wars: The Empire Strikes Back In Concert,” we recently filled the house three times over,” David Fisk, president and CEO of the Charlotte Symphony, told Invest:.

To kick off an exciting summer of music, Charlotte Symphony is bringing back its Summer Pop series for the first time since 2019, which incorporates themes from Hollywood, the big band era and Broadway musicals. To make live music more accessible, Charlotte Symphony is also presenting six free community concerts throughout the month of June.

By putting on more shows, the tourism industry, which provides 144,000 jobs as the region’s fourth-largest sector, will reap the benefits. “When we bring a big show in, a lot of tourists stay overnight and visit our restaurants,” Tom Gabbard, CEO of Blumenthal Performing Arts, told Invest:. “Additionally, we hire a lot of local people, not just artists, to work on a show and these are really meaningful jobs that went away during the pandemic and now are coming back.”

In the early goings of the pandemic, musicians and venues had to shift their focus to online music events to continue to foster that sense of community despite restrictions on public gatherings. The Charlotte Symphony hosted a virtual concert series, called CSO on Demand, that played an important role in providing live music entertainment during tough times.

“The appetite of people to return is encouraging for us, but it doesn’t make sense to totally abandon the online platform. There will always be a market for us there, especially in education and with audiences who don’t have the access to see us in person. We are supplementing our reach by returning to radio broadcasting, in partnership with WDAV, which offers yet another great option for those who are not able to attend a live performance,” said Fisk.

But the live music experience is difficult to replicate, and many are ready to get out and enjoy shows again. “As society moves through periods of social change and unrest, music will always be there in our lives, and we want to use it to be of service to others,” Fisk told Invest:.