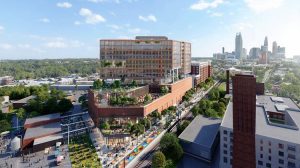 In 2019, the Queen City nurtured a culture of tech company headquarter relocations with giants such as LendingTree and Honeywell settling into the region. Despite recognized names establishing in the area, the Charlotte Metro Area slipped from the top spot for tech jobs, according to CompTIA’s annual report. The world’s leading tech association ranked Charlotte No. 6 on its “Tech Town Index” for 2019, dropping from last year’s No. 1 spot. Though Charlotte ranked out of the Top 5 cities for tech jobs in the nation, the report and local education leaders say there is an exciting energy in the region as it relates to technology that they will continue to develop and invest in.

CompTIA cites long-term job growth as “one of the reasons the Charlotte-Concord-Gastonia metro just missed the Top 5.” According to the report, in 2018 “the area showed signs of an 11 percent job growth over the next five years” but as the end of 2019 nears, the growth projection sits at 9 percent. However, the report says that when it comes to the technology industry, Charlotte is “still putting its money where its mouth is.”

In the past 12 months, more than 52,000 tech jobs were posted, the majority of those positions being for developers, software engineers, and data analysts, the report states. As such, local educational leaders say institutions need to capitalize on the energy, diversification, and growth of the local technology industry. “What is going on with fintech, healthcare, and energy is exciting here,” said Queens University of Charlotte President Daniel Lugo to Invest: Charlotte. “The most exciting part is the growth of the technology sector. We want to be at the forefront of working with those businesses.” As an institution focused on liberal arts, Queens University of Charlotte is meshing tech skills, such as coding and data analytics, with its liberal arts curriculum. “We are actually training students with hybrid skills,” Lugo said. “We want to be in a position to have retained that general education of the liberal arts, but to look at pedagogy and the curriculum to empower our folks to understand coding and data analytics, to look at this whole 21st century and technology in a more robust way.”

Similarly, Catawba College is also upgrading its curriculum to account for the growth of the region’s technology industry. “We’re launching a master’s in data analytics, as well as a minor in data analytics to accompany almost any other major,” said President Brien Lewis to Invest: Charlotte. “We’re trying to take advantage of what’s in our region.” Going forward, the Charlotte Metro Area has the opportunity to continue to distinguish itself as a tech town. “The opportunities are to be cutting-edge in specific areas, such as data analytics,” Lewis said. “It’s a matter of capitalizing and investing further in what’s already in Charlotte to create an environment where people know we’re a leader in that area.”

For 2020, As the Queen City continues to grow and attract companies and new residents, factors such as access to banks and capital, a diverse and growing talent pool, access to a robust logistics and distribution infrastructure, and a cost of living that is lower than the national average will prove advantageous for the local economy and those wishing to tap into its technology sector.