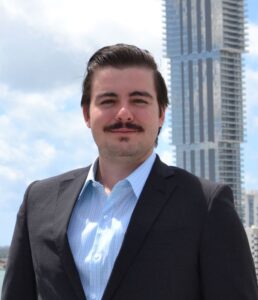 2 min read June 2022 — Joshua, senior writer at Capital Analytics, discusses his journey, so far, with Capital Analytics and how his bachelors in politics applies to his current role. Moreover, Joshua also speaks on how being bilingual has helped him throughout his young career.

How would you describe your journey thus far at Capital Analytics?

People have always thought I was good at writing. I’ve also been told more than once that I have a particular way of speaking, and it translates well into writing. Due to this, I kept developing this skill. When I first saw the position available at Capital Analytics for Content Manager, it seemed to be one that you have to do a lot of writing and talking. Now, almost two years later, here I am.

You received a Bachelors in Politics from Bates College. How are you able to apply that experience to your current position?

Although the questions we ask are more business focused, at the end of the day, there’s a political aspect to a lot of them. Politics informs a lot of what happens in the business community. For example, there are tariffs and trade wars, and there’s the political responses to the pandemic. Politics feeds into the conversation a lot of the time, and, on the political side of things, you find out how those institutions work. Politics also plays a role because relationships are built between businesses and politicians. You also see owners looking for business reasons in pursuing policies or lobbying for certain outcomes.

How has being bilingual helped you?

It has allowed me to establish a particular bond with individuals. Language is a kinship thing. When you can speak a language, you’re speaking the language of families. One specific example is when I was working as the Content Manager for Invest:Minneapolis-St. Paul. When we started the project with North Hennepin  Community College, their president was originally from Miami and he came from Cuban descent. It came up in the conversation, and we quickly shifted to speaking Spanish. There aren’t many Hispanic speakers in Minnesota, so it established a bond that goes deeper. In many instances, you can leverage it for the business. However, it’s nice and refreshing to be able to speak in another language.

Are there other languages that you want to learn?

I want to learn as many languages as possible. At my core, I’m a history nerd. Language itself is a living embodiment of history. When you study a language, you see how much it changed. It’s interesting to be able to explore those dynamics and be able to see how it evolves. I would love to learn Portuguese. I have a lot of Brazilian friends, so it would be nice to speak their language. Also, Mandarin would be useful because the Chinese market is something that can’t be ignored, especially since we’re a business publication. I’ve also had this thing about learning German because it’s a practical language.

Coming from a family of immigrants, do you ever feel the pressure to overachieve?

It’s interesting because I’ve lived a comfortable life. I was born and lived in the United States. My parents came from Cuba, and they came here with only the clothes on their backs. Essentially, they had to restart their lives. As easy as it is to get comfortable, that’s not an option. There is a desire to do more, and my parents instilled in me a drive to continue pushing the boundaries for more. They were able to raise a family and buy a house, which is the American dream. They have now been working various years in their respective professions. With this background, there’s always a desire to do more. My mother is already asking when I’m going to law school.

Do you see a future in politics?

Yes, I think the mustache will probably be gone by then. I would start locally. You have to walk before you can run. I’m from Miami, and I’ve seen the city grow and develop the hub that it is today. Due to my own background, there are a few things holding the city back from my perspective. It is my city, and I love it. I want to be part of what helps it grow.

Where do you see yourself in the next ten years? Do you have any goals you want to achieve?

One lesson from the pandemic is that you can’t plan that far ahead. Regardless, I hope I can have my law degree by then, and maybe I will be starting a family. Ultimately, I want to continue to say I’m happy. It sounds cliche, but, in terms of personal goals, it’s easy to fall into a routine. For me, routines are death because, in a blink of an eye, ten years end up passing. Every morning, I want to be able to wake up and start a new adventure.