Business is Booming for Deerfield Beach

Business is Booming for Deerfield Beach 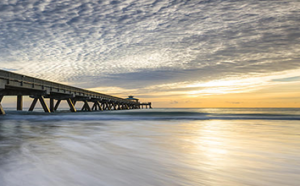 2 min read September 2019 — When discussing growth in Broward County, the conversation would typically center around the economic hub that is the city of Fort Lauderdale. While it may be the most universally recognized city in Broward, it is certainly not the only one in the county experiencing an economic boom.

Located at the northernmost point of Broward County is Deerfield Beach, a city whose growth cannot be understated or overlooked. Home to over 80,000 individuals, this beach community has capitalized on the economic prosperity and ever-increasing migration of individuals to the South Florida region. Invest: Greater Fort Lauderdale spoke with Bill Ganz, the mayor of Deerfield Beach about the city’s major developments in the last year. “We have had a lot of growth in the city in the last 12 months, including over 11,000 building permits that total nearly a billion dollars in new construction. We have new residential developments under construction from some of the top developers in the area, such as Lennar, Toll Brothers, Ram Realty and Weingarten Realty. One of the finest organizations in Broward County is also located in our city, JM Family Enterprises. They are working on a $176 million expansion of their corporate headquarters,” he told Invest:.

The growth of Deerfield has not just been predicated on the development of new construction projects for the private sector. The city has recognized the importance of reinvesting in itself to better serve its residents. This is apparent in the ongoing construction of a new 12,000-square-foot community center, which is a revitalization of the old Tigner Community Center. When completed, it will be one of the largest community centers in Deerfield Beach.

Successful economic growth of an area in Broward County is also dependent on addressing future threats to that growth. Ganz made a point of talking to Invest: about how the city is addressing the looming threat of sea level rise and its efforts toward environmental resilience. “We have been working on these issues for several years, starting with the West Wellfield project, which helps to solidify the water system in Deerfield Beach, so we are much better protected against salt water intrusion. We have taken the initiative to become LEED certified with some of our city projects that have recently finished, including the new pier and facilities on the beach.”

He continued to speak on how he hopes Deerfield will serve as a positive example on these issues for other areas of Broward County. “We have a new Siemens Energy Efficiency Program that we hope can be used as an example for other municipalities to address these issues. The city has also been working on an Emergency Preparedness and Response Plan. We don’t want to just talk about sea level rise, but really address it from a safety standpoint, especially in the event of another hurricane.”

The advancement of Deerfield Beach has not been by chance, and can be attributed to well-thought-out and deliberate initiatives and actions taken by the city’s public and private sectors. There is a recognition that to sustain the economic growth, the city must continue to present unique opportunities to businesses in the area.

One of the ways the city is doing this is by recognizing the need to retain a strong workforce within the city, as highlighted by Ganz: “We want to make sure that we provide them with a wide variety of opportunities, not just entertainment, but business opportunities as well. We also are trying to make sure that we are appealing to all generations of the workforce. One of the ways we hope to accomplish that is with some of the new residential construction that is being built. We have worked with these developers to make sure they are keeping the new buildings attractive to all segments of the workforce in the city. We are also fortunate to have the most beautiful beaches in all of Broward County, and these people can really take advantage of this being a nautical destination.”

While it has been a successful year for the city, local government and the business community will continue to focus on sustaining this growth for the foreseeable future.