Bucs primed for success this year in the Bay

Bucs primed for success this year in the Bay 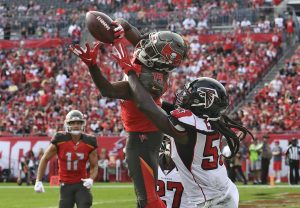 2 min read September 2020 — There were points this summer where it seemed impossible to fathom how the National Football League would be able to reorganize itself to work in a pandemic landscape. Fast forward to present day and the league has been able to return in a resounding fashion, with telecasts like Week 1’s New Orleans Saints versus the Tampa Bay Buccaneers attracting an average audience of 25.85 million viewers, which FOX credited as its most watched telecast since Super Bowl LIV in February 2020. And while this game may have ended in a loss for the Buccaneers, there is a lot to be excited about in Tampa Bay for this upcoming season on and off the field.

March 2020 marked a momentous moment for longtime fans of the Bucs when the announcement was made that six-time Super Bowl-winning quarterback Tom Brady would be taking his talents to Tampa Bay. Brady’s Buccaneers jersey quickly became the league’s highest selling football jersey prior to the start of the 2020 season. With Brady at the helm, it wasn’t long before multiple big name free agents fixed their sights on the Bucs franchise and were quickly added to the roster, including tight end Rob Gronkowski, linebacker Jason Pierre Paul, running back LeSean McCoy and defensive tackle Ndamukong Suh. The addition of Tom Brady and increased talent level on the overall team has ultimately resulted in financial benefits as well. The Tampa Bay franchise, which in 2018 was valued at an estimated $2 billion, is now worth an estimated $2.3 billion.

This reinvigorated roster has also reignited the fanbase for Tampa Bay’s football team who have not seen a postseason victory or success since their sole Super Bowl win in 2002. The team, which ranked 30th in fan attendance in 2019 with an average of 51,898, now faces a new challenge, but this time, it’s not due to lack of ticket sales. Although the return of football may have returned some sense of normalcy to people’s daily lives, there are still the constant reminders of the current pandemic that the world finds itself in. For football, one of those reminders is the limited capacity of fans allowed at stadiums across the league. The Bucs, who saw a surge in season tickets sales for this season, have now also had to come to terms with what these crowd restrictions will mean for the near-term future. This has resulted in the team making the decision to hold their first two home games with no fans in attendance, much to the dismay of Gov. Ron DeSantis who hoped these games would serve as an example of how Tampa Bay is prepared to host this season’s Super Bowl.

“I really want to be able to show that Tampa is going to be a great place to host the Super Bowl,” DeSantis told the Tampa Bay Times. “Showing this community is ready to host a great Super Bowl, having some fans there would’ve been a good first step. It’s not where we need to be.” The Bucs are currently looking toward a tentative reintroduction of some fans to Raymond James Stadium in their game against the Green Bay Packers on Oct. 18.

Nonetheless, residents of Tampa Bay can take comfort in knowing that the region they call home will also be home to this year’s Super Bowl. Tampa Bay has, seemingly overnight, become one of the football meccas in the nation.