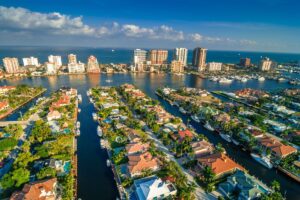 2 min read September 2022— Earlier this week, Fort Lauderdale’s Mayor Dean Trantalis delivered his state of the city address and highlighted key updates to ongoing work across the city, with infrastructure, particularly around the New River, playing a key role in the city’s future.

The Venice of America is at a crossroads, as a substantially growing population, greater density and a growing aversion to automobiles — a result of both demographic changes, traffic congestion and increased costs — means that rail transportation is beginning to see a renaissance in South Florida. Brightline is the most prominent example, with the high-speed intercity trains crisscrossing back and forth from West Palm Beach to Miami, stopping in Fort Lauderdale along the way.

The increased rail travel means that the New River bascule bridge, built in 1978, is lowered with increasing frequency, and having been built at-grade increases marine traffic and impacts a key pillar of the city’s economy. With the approval of the first leg of the new Broward Commuter rail link, which will eventually link Broward County to Miami-Dade and Palm Beach counties via rail east of I-95 (as opposed to Tri-Rail, which runs west parallel to the interstate), adds further urgency to the situation. Nevertheless, the approval is a positive first step that will provide momentum for a final decision.

“The Coastal Link will have stops in downtowns across South Florida and would ease congestion on north-south roads, including Interstate 95,” said  Mayor Trantalis in his address. “This could be a real game-changer for the region. It is a complicated project, and a key issue is how the service will cross the New River and downtown thoroughfares. We cannot allow increased train traffic to harm our marine industry or downtown’s renaissance.”

Two potential solutions have been identifiedopens PDF file , with city and state officials at loggerheads over how best to proceed. The easiest solution, and the one favored by the Florida Department of Transportation, is simply raise the bridge as high as possible — creating an over two-and-a-half mile viaduct over the river and city. In his address, Mayor Trantalis argued that creativity, and a tunnel, were the best solutions.

“The city wants to think creatively. For that reason, your commission has unanimously backed the need for a tunnel. Expert after expert has proven to us that a tunnel is viable both technically and financially. These are specialists who have built tunnels all over the world in many different conditions, including under Sydney’s harbor and the Colosseum in Rome,” he said.

The tunnel would require modifications to existing infrastructure, such as the Brightline station. While the private rail services’ platform would still be in use throughout any potential construction, the tunnel’s completion would mean the undergrounding of platforms to board the trains.

The impact on the community, or rather the lack thereof, would be the greatest benefit. While the Biden Administration has allocated $1 billion to connect communities that were riven by highway construction, a heavy-rail bridge would divide Fort Lauderdale’s historic Northwest District and overshadow the city’s riverwalk, Mayor Trantalis points out.

While a final decision remains to be made, Broward County has approved the first leg of the commuter rail link in the interest of getting the project started. It will connect to a temporary station south of the New River by Broward Health in the meantime, giving city, county and state officials time to hash out the final details over the most suitable way to cross the river. Miami-Dade County and Brightline have already begun their portion of the Coastal Link project with the building of the Brightline Aventura station. While an operator for the coastal rail link trains has yet to be selected, a Brightline affiliate has been angling itself for the position.