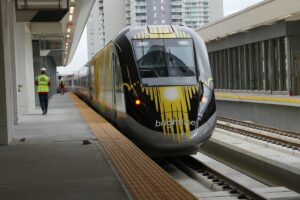 First reported by The Next Miami, the company has been hard at work constructing new double- and single-track rail that will link South Florida to the Orlando International Airport (MCO).

While much of the route follows or uses the already existing Florida East Coast (FEC) rail-corridor, the additional traffic the passenger rail will create has led to double-tracking of significant portions of the line, in addition to Brightline-dedicated sections closer to its Orlando destination.

Over the course of March, there were approximately 1,149 construction workers actively engaged in the buildout of the new route, with its anticipated completion of late 2022. After a period of testing, the first customers are expected to be able to enjoy the ride from Miami and Orlando beginning in 2023.

The $2.8 billion project remains on schedule and within budget, reports The Next Miami

Brightline has been heralded as a potential solution to the traffic and hassle of driving between South Florida cities or the longer 3 ¾ hour drive from Miami to Orlando. Brightline and its affiliates have also been looking to establish a dedicated commuter rail line, with five planned stations between downtown Miami and Aventura, with the agreement allowing up to seven stops. The commuter line will have new dedicated infrastructure to support it, including new railways to avoid interfering with current Brightline trains.

For the Brightline commuter rail project, Miami-Dade County has issued a notice to proceed to surveyors M.G. Vera and Associates earlier this month to mobilize along the Miami Dade Northeast Corridor. M.G. Vera and Associates began the work on April 5 and will be necessary for the next phases of rail design and development along the corridor. In February, Brightline had remarketed $285 million worth of bonds for the project. The company paid $245 million for the 93-year commuter access rights between Miami-Dade and Broward County.

Upon completion of its Miami-to-Orlando route, Brightline hopes to connect Orlando to Tampa. Discussions are being finalized over where the potential rail connection will follow. A potential compromise, where Brightline will operate on a potential SunRail extension to the Orlando Convention Center before moving onwards to Tampa seems likely.