Brightline to restart services at end of 2021

Brightline to restart services at end of 2021 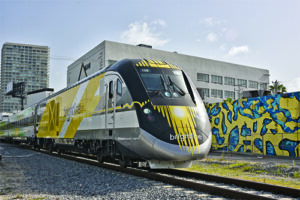 2 min read January 2021 — Brightline, South Florida’s upscale, high-speed train, is slated to restart service toward the end of 2021. Services in the downtowns of Fort Lauderdale, West Palm Beach and Miami came to a screeching halt in March due to the COVID-19 pandemic.

Brightline is on the ninth month of its hiatus, during which it solidified its plans for local stations and a 170-mile expansion to Orlando, including stations at Orlando International Airport and Walt Disney World. The Walt Disney World extension is expected to cost $300 million, two-thirds of which will be funded by bonds.

In spite of the Brightline West project between Apple Valley, Calif., and Las Vegas being postponed due to the inability to sell bonds, long-term investors are still keen on the Florida project, picking up $950 million in bonds around Christmas.

The memorandum for the new bonds said that Disney and the three new stations planned south of West Palm Beach at Boca Raton, Aventura and PortMiami would push total ridership projections in 2024 to 3.1 million, with an average fare of $102. Additionally, the memorandum pegs the installation of Wabtec’s I-ETMS positive train control system throughout the whole corridor at $22 million.

In a previous memo in 2020 sent to investors, the company said it had to reassess amid the pandemic.

Brightline spokesman Ben Porritt said the company is beginning to gradually restore the 250 jobs that were lost due to the pandemic shutdown.

“There is a rolling plan to bring back positions,” Porritt said. “Some of this has started and will continue throughout the year. As it relates to station and operations staff, we expect them to be brought on board between 30 to 60 days prior to resuming service.”

Virgin, an international empire of boats, trains and cruise boats, previously sponsored the train but terminated its licensing agreement with Brightline after encountering financial turmoil during the pandemic.

“We will no longer use the Virgin brand following our parent’s termination of its licensing agreement with Virgin Enterprises Limited (together with its affiliates, “Virgin”),” stated an Aug. 2020 bond report. “Virgin has no remaining affiliation with us, or parent or its affiliate.”

Although Brightline will not resume service until the end of the year, the trains will be on the tracks this Sunday to upgrade the corridor between Miami and West Palm Beach, performing a series of signal tests.

The first round of tests in South Florida will start with Miami-Dade, spanning this Sunday through Jan. 30. In Broward County, the tests will start next month. The tests will respectively begin Feb. 14 and April 25. Each test will last between five and seven days.