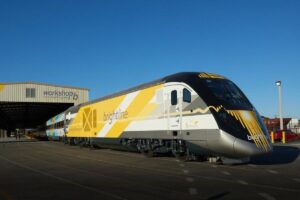 2 min read August 2021— In the United States, demand is high for infrastructure improvements. Boldly conceived transportation mega-projects, like Florida’s Brightline high-speed passenger rail system, are helping to answer this call. Opened to much fanfare in 2018, the privately run trainline can already claim a number of victories.

Beginning in Miami, the route currently snakes its way up Florida’s east coast, through Fort Lauderdale to West Palm Beach, and its continued progress is imminent. As of July 2021, a $2.7 billion, 170-mile extension to Orlando International Airport (MCO) from West Palm Beach is 55% complete and due to enter service in early 2023.

While the COVID-19 pandemic forced the route to temporarily close, with a probable re-opening in late 2021, the Brightline is already regarded as a resounding success. Ridership numbers from 2018 to 2019 grew by over 300,000, from 579,000 to 885,000. By 2024—at which point other arms of the route are expected to be complete—it is estimated that 9.9 million annual passengers will be generating $792 million in revenue. Thankfully, despite the cessation of service over the pandemic, construction has continued apace.

With 17 daily round trips out of Miami, Brightline is destined to upend the commuting and travel experience in the state of Florida. The tracks, which connect cities up and down the coast, are also being adapted for commuter rail passengers, a development that could not come a moment too soon. Since the pandemic spurred the move to remote work, Florida has seen unprecedented population growth. Roads are clogged and the transportation infrastructure is groaning under the weight of this influx.

The construction of Brightline was the right and prescient thing to do. But, many are wondering, where does the project—with its considerable momentum—go from here?

The aim is to get to Tampa. From MCO, Brightline will cross the state. It will stop at the Disney World complex—where construction on a station is already underway—and then continue to Tampa, thus uniting many of the state’s key economic nodes in a wide arch of high-speed intrastate connectivity.

But the progress to Tampa has not been without its hiccups. Exemplifying how complicated building a high-speed network can be, last March the Florida Department of Transportation (FDOT) issued a July 31, 2021 deadline for Brightline to have completed a list of steps. According to the FDOT, Brightline had to obtain permission from a series of authorities: from the Greater Orlando Aviation Authority to operate on MOC property; from SunRail (owned by the Central Florida Commuter Rail Commission) to share the track it owns that crosses the state; and from the Central Florida Expressway Authority (CFX) to operate on highway right-of-way (the Brightline track would partially be following a highway in its journey across the state). In addition to all of this, FDOT demanded Brightline to provide regular progress and environmental impact reports.

Brightline was not able to deliver this by the July 31 deadline, but, in a show of confidence in the overall project, the FDOT has allowed the deadline to be extended until Sept. 30.

The main point of contention leading to the delay was a conflict between the Brightline and the CFX. On July 20, the expressway’s governing body held a contentious meeting over whether Brightline should construct its Orlando-Tampa route along the S.R. 417 expressway or along S.R. 528. Representatives from the International Drive tourism strip, along with the Hunter’s Creek residential community, were pushing for Brightline to build along S.R. 528. The private rail company would prefer to follow S.R. 417 as it would be significantly cheaper. In fact, by one estimate it could be the difference of $700 million. If constructed along S.R. 528, there would be a significant reduction in room for track space, forcing Brightline to construct expensive elevated tracks along the interstate on its way to the Disney complex. If forced to do this, it is not yet clear how Brightline would make up the extra cost, and talks are ongoing.

The fact that the FDOT granted a postponement and not an annulment means that there is significant hope that the actors in this conflict will hash out an agreement. Some see it as likely that the Brightline will have to cover reduced toll revenue that the CFX is surely going to see as a high-speed train takes some of its traffic.

Of course, completion of the project could mean so much more than a revenue shortfall. A bold new infrastructure project for a rapidly growing Florida would be a great symbol of progress, one with implications felt beyond the state line.