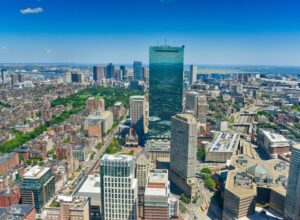 2 min read November 2022 — A major step toward a decarbonized energy future was taken last week in Boston as Vicinity Energy, holder of the nation’s largest district energy portfolio, commemorated its deconstruction of a natural gas-powered steam turbine to make way for a new electric boiler.

The event was attended by Boston Mayor Michelle Wu who announced plans earlier in the summer for a home-rule petition to establish fossil fuel-free standards for new constructions in Boston. In her decision, Wu and Boston join a number of other municipalities across the country that are reaching for a fossil fuel-free future, many with district energy initiatives as part of their plans.

“It is clear that the work of ensuring our planet remains livable is going to require all of us: every level of government, business, and community. We’re very grateful that Vicinity’s carbon-free eSteam product will power the leading industries we’re already known for here in Greater Boston such as life sciences, healthcare, commercial real estate, and many more,” said Wu.

“District energy systems are a highly efficient way to heat and cool many buildings in a given locale from a central plant,” as defined by the Environmental and Energy Study Institute (EESI).

The systems use a network of insulated pipes to circulate steam or chilled water through areas where demand is concentrated like downtown areas and campuses. Because heat and cooling can be produced in and distributed from a central plant, district energy systems remove the need to install point-specific solutions such as individual space heaters or air conditioning units. This, by extension, isolates the 41% of energy residential consumption used for heating and cooling from the wider power grid. Moreover, thermal energy for district energy networks is often produced in cogeneration plants, where the byproduct of heat from conventional electricity production is harnessed for redistribution.

“District energy systems are agnostic to fuel type. This fuel flexibility enables the use of lower-carbon, local sources of energy, increasing the resiliency and security of the network and the health of our communities,” according to Vicinity Energy’s website. This means that, while early district energy was powered by coal 140 years ago, their fuel networks have consistently and reliably been adapted to make use of the best options of the time. The adaptability of this method makes it possible for companies like Vicinity to take advantage of the growth of the renewable energy industry in the U.S. to offer a decarbonized energy product to the residents of Boston and Cambridge.

Products like Vicinity’s eSteam, which the company is billing as a “unique and innovative renewable energy product,” draws renewable power from the grid to run centralized electric components that then pump steam and chilled water to their customers. Recently recognized for its growth by the International District Energy Association, Vicinity Energy emphasized the ease of scaling district energy networks as demand continues to grow.

But while scalability makes it simple to expand existing district energy networks, planners looking to develop new networks face a lot of challenges. “The same factors that make it hard to upgrade underground urban electrical grids will make it even harder and costlier to deploy the networks of pipes needed to start moving water or steam from building to building,” wrote Jeff St. John of clean energy-focused media outlet Canary Media in June 2022.

Similar price issues come from the need to provide district energy that is decarbonized. The cost of producing steam with electrode boilers is often more expensive than producing it with fossil fuels. The same goes for the costs of overhauling the fossil fuel-based sources from which a district energy network might draw power. However, new technologies for producing heat are becoming available. Research from the American Council for an Energy-Efficient Economy shows that “moderate [industrial heat pump] deployment in industrial sectors with high process-heating demands could save up to 32% of net energy use and CO2 emissions/year — equivalent to the emissions of 1.3 million U.S. homes and 2.7 million passenger cars, respectively.”

As governments at every scale look to meet more ambitious targets for decarbonization, district energy networks could play a larger role. “Where these systems exist, they’re like gold,” said Vicinity Energy CEO Bill DiCroce, as cited by Canary Media. The question lies on how cooperation will look between private enterprise and governments to properly assess the impact of and funding the continued expansion of district energy throughout the country.