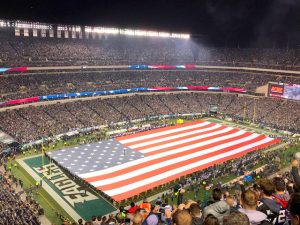 January 2018 — “Win it all and the party is on us,” read a Bud Light tweet to the Eagles back in August. With the Eagles securing their place in one of the biggest sporting events in the world, it’s not just free beer that’s on the line for the city of Philadelphia.

While it’s a known fact that the host city of a Super Bowl is going to experience massive (if inconsistent) economic gain from the event, the impact on the competing teams’ home cities is a little more nebulous. After all, there’s no obvious boost in things like hotel occupancy, flight bookings or ground transportation. The potential economic benefits for home cities are more of a long-term bump rather than a short-term windfall.

With all of the media attention and news coverage currently being piled on the Eagles, Philadelphia’s image as a destination city is sure to get a boost. This could lead to an increase in visitors down the road, especially in sports tourism (good news: Lincoln Financial Field offers both public and private tours). Team and related merchandise sales are on the rise (costume shops were scrambling to keep those rubber dog masks in supply even before the playoff game), and locals are feeling a renewed sense of pride in their city. As Eagles owner Jeffrey Lurie said, “You just want to win so badly for them.”

Psychic income — an economic term to describe non-monetary rewards — might not always come with big dollar signs, but it does bring real benefits. Emotional satisfaction is hard to measure, so if you’re the type that needs numbers, here’s something to consider: one study found that the real per capita personal income was higher in cities that have had a Super Bowl win, suggesting there’s a link between Super Bowl wins and worker productivity.

What we know for sure is that this is the first time the Eagles have been to a Super Bowl since 2004, and they’re the biggest underdogs to make the big game since 2009. Despite boasting one of the best defenses in the league, they have their work cut out for them in taking on the Patriots on February 4 at the U.S. Bank Stadium in Minneapolis.

While Boston cream donuts might not be getting any love from the City of Brotherly Love (one Philly shop banned their sale until after the Super Bowl), there’s no question that the underdog team from an underdog city is galvanizing its fans.

And if that’s not enough to get you excited, don’t forget that if the Eagles win, Bud Light has promised beer to the whole city!