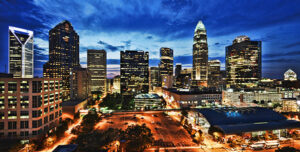 2 min read AUGUST 2019 — Charlotte has long been the eastern hub of Bank of America (BofA) and is one of the headquarters of Wells Fargo. But this year it has been attracting attention from the third bank belonging to the Big Four, which together hold around 45% of total U.S. deposits. JP Morgan Chase announced earlier this year that it will add up to 21 branches in Charlotte in the next three years.

“We’ve been serving the Carolinas for more than a decade and opening branches allows us to lend to more consumers and small businesses, and offer good paying jobs,” Thasunda Duckett, CEO of Chase Consumer Banking, said in a press release.

JP Morgan Chase will be entering a market where many are seeing huge potential. In April this year, U.S. Bank announced it will open 10 branches in the city by 2020. The bank, which emerged from the $66 billion merger between BB&T and SunTrust, will also be headquartered in Charlotte.

Despite Wells Fargo and BofA controlling around 89% of the area’s deposits, the new entrants seem confident there will be a big enough piece of the pie for them to get their teeth into. “This expansion marks a major milestone for our firm by allowing us to serve more customers, small businesses and communities across the country,” said Duckett. “To us, this is so much more than building branches. This is about new customer relationships, better access to credit and local jobs.”

Charlotte is home to 425 corporate headquarters in the finance industry. At 2.5%, the city has the lowest corporate tax rate in the country. For three years consecutively, North Carolina’s annual residential growth has exceeded 100,000 people.

“I don’t think there’s any industry that’s having an easy time staffing with the kind of human capital that they need, so one of North Carolina’s biggest advantages right now continues to be population growth,” says Christopher Chung, CEO of the Economic Development Partnership of North Carolina told WeWork publication FiveThirtyEight.

Charlotte’s finance industry is the second-largest banking hub in the country behind only New York City, with banks holding more than $2.3 trillion in assets. The city has added more than 200,000 jobs since 2001.

“We’ve built a great city that helps companies attract and retain today’s best talent,” Frances West, business recruitment and retention leader in Charlotte’s Economic Development Office, said to FiveThirtyEight. “Where we are today is not by happenstance and where we will be in 10 years is not by happenstance — it’s all by intentional growth.”

And the financial institutes have Charlotte in their crosshairs for the long run. U.S. Bank announced it reached an agreement with the city’s authorities this month to be the lead sponsor of a delayed pedestrian bridge project that connects Charlotte’s uptown and South End. U.S. Bank will contribute $1 million to the $11 million infrastructure project.

“Bridging the gap between uptown and South End will provide additional connectivity for residents, workers and guests, while further knitting together two of our great urban neighborhoods,” Michael J. Smith, CEO of Charlotte Center City Partners, said in a press release.

To learn more about the companies mentioned, visit: