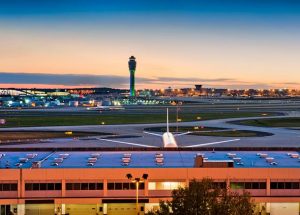 2 min read SEPTEMBER 2019 For the 21st consecutive year, Atlanta’s Hartsfield-Jackson Airport was named the world’s busiest airport this month. With passenger traffic of over 107 million in 2018, the airport continues to serve as a major economic driver of the city. Capital Analytics took a closer look at the characteristics that make the airport the world’s transport hub.

“It’s a complex operation,” Airport General Manager John Selden told How Stuff Works. “One little piece going astray can cause massive chain-reaction ramifications. To keep the complexity of this operation running smoothly, it takes a village.”

But to keep operations running smoothly, the airport must constantly keep up with growing passenger numbers through more and more expansions. “As you look at passenger flow over time, it’s always trying to eliminate the bottleneck,” Tom Nissalke, the airport’s assistant general manager of planning told How Stuff Works. “Sometimes, when you fix one bottleneck then it’s another bottleneck somewhere else.”

In 2016, the Hartsfield-Jackson Airport unveiled ATLNext, a $6 billion capital investment in the continuous expansion of existing infrastructure. By 2022, a total of $1.9 billion is to be invested in the modernization of the central passenger terminal, which will include aesthetic renovations that involve landscaping and lighting, as well as the extension of Concourse T to add five new gates and the addition of 10 new gates to Concourse G.

To accommodate growing air traffic, $1.3 billion will be invested in airfield upgrades that include a sixth runway, slated to be completed by 2034. Investments in auxiliary services such as parking and a mixed-use hotel and office space development are also planned. Air cargo facility upgrades will come in at around $200 million.

“The infrastructure has to keep up with the growth,” Selden said to Reporter Newspapers. “We cannot turn into [New York’s secondary airport] LaGuardia. My goal and my team’s goal is to do everything we can to work with everybody that we need to [in order to] ensure that Hartsfield-Jackson is not a limiting factor on the growth of the Atlanta region.”

The investment is a joint venture between the public and private sector. A consortium of three companies – CH2M Hill (since acquired by Jacobs), RohadFox and Parsons Transportation Group – won the contract to carry out the ambitious expansion. Overall, PPPs are an innovative idea in airport projects, but could be the future, allowing the public sector to free up funds for other priorities. “I think we’ll see other examples where other companies get involved. And gradually, familiarity builds, and it won’t seem outlandish at some later date when the subject of the whole airport comes up,” said Robert Poole, director of transportation policy at Reason Foundation, in an interview with the Atlanta Journal-Constitution.