Atlanta’s suburbs are growing faster than the city

Atlanta’s suburbs are growing faster than the city 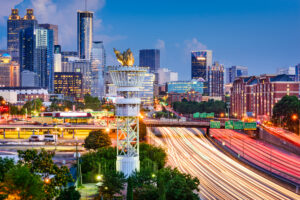 2 min read February 2021 ⁠— Atlanta’s population surge in recent years has earned the city the title of fourth-fastest-growing metro in the United States according to Freddie Mac. The leading beneficiary of that growth underpins a trend accelerated by the pandemic: the suburbs are surging.

Atlanta grew by almost 718,000 residents between 2010 and 2019, putting it only behind Dallas, Houston and Phoenix. Just between 2017 and 2019, the city grew by 147,932 residents. That growth was predominantly in suburban areas. During this two year period, Atlanta experienced “the ongoing expansion of a technology hub around Georgia Tech, the revitalization of Atlanta Beltline neighborhoods such as The Old Fourth Ward and Reynoldstown, and new housing and stores and restaurants in suburban downtowns such as Alpharetta and Duluth.”

This growth in the Atlantan suburbs has only been exacerbated by the pandemic. In November 2020, Waterton, a Chicago-based real estate investment firm, bought four Atlanta area apartment developments for $325 million. This was one of the largest multifamily transactions of 2020 in the Atlanta metropolitan area, demonstrating a big push for continued suburban investment. Units purchased in the deal were older but well-located, including Deerfield Village in Alpharetta, Roswell Village in Roswell, Briarcliff Apartments along the North Druid Hills corridor and Gwinnett Pointe in Norcross.

According to the analyst Haddow & Co., rents for intown projects in Atlanta dropped 5% in the third quarter year-over-year. Atlanta’s shift to the suburbs is representative of a national trend as well. The pandemic accelerated trends in existence before COVID-19, including a growing shift in preference for suburban living and its effect on the real estate market. According to Cushman & Wakefield research findings, millennials, individuals between the ages of 23 and 38, have been migrating to the suburbs since the mid-2010s as they become homeowners and start families. As the pandemic continues and people move farther from city centers and metropolitan work areas, the shift to the suburbs also puts forth a rethinking of the workspace and commute times. Experts expect the ubiquity of work-from-home to have a negative impact on demand for office space over the next quarters.

It also seems like these pandemic-accelerated trends are here to stay. In a survey conducted by the National Association of Home Builders, 70% of the respondents who moved in the past 12 months during the pandemic said they did not plan to move back to their pre-pandemic market of residence. Meanwhile, demand for home offices is up, a feature that is less likely to be found in a metropolitan area.

More affordable markets like Atlanta and its suburbs are on the rise.