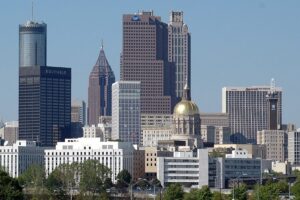 2 min read July 2021— It seems everyone wants to be in Atlanta. While the region has been taking steps to balance development and affordability, developers have continued to buy up and build on the city’s increasingly costly real estate, to the detriment of some local neighborhoods.

Equity Residential, the Chicago-based investor that pulled out of the Atlanta apartment market in 2012, signalled its return with the purchase of a West Midtown tower for a record-breaking $135 million, or $423,198 per unit, reports the Atlanta Business Chronicle. The sale marks the first time that a West Midtown apartment has surpassed the $400,000-per-unit threshold.

But developers aren’t just coming from the North. Miami-based Allen Morris Co. is looking to rezone the West Midtown area at 660 11th St. NW and turn the current industrial space to mixed residential and commercial use. The goal is to replace the current warehouse on the site owned by TB&P Properties LLP to a 225-foot tower, not too far from Equity Residential’s newly purchased tower, called The Osprey, at 980 Howell Mill Road.

Although West Midtown is one of the more noticeable hotbeds of activity, development extends across the Atlanta metropolitan area. The Metropolitan Atlanta Rapid Transit Authority (MARTA) exemplifies that with their recent sale of a parcel of land, around 2,830 square feet surrounding Lennox Station, for over half a million dollars.

While the city may ultimately benefit from the rash of on-going developments, the adverse impacts have become more visible as prices begin to rise and speculative housing begins to pop up in new areas and neighborhoods. This gentrification process has resulted in a pricing out of residents in what are typically historically Black communities.

For Atlanta’s Pittsburgh neighborhood, the rising prices have elicited strong responses from neighbors and local community action groups. These groups have taken to posting signs calling for action to prevent the pricing-out of residents in a neighborhood that was considered “ground zero for foreclosures” in the 2008 housing crisis, according to the local Saporta Report.

For community organizing group Community Movement Builders (CMB), which organizes chapters in Atlanta, Dallas, and Detroit, the development exemplifies the dangers presented by gentrification, which it describes as, “…an economic process of demand in which profit-hungry real estate enthusiasts and private developers from outside of the community buy up homes of community members and drive up the cost of living—transforming a neighborhood’s racial and economic makeup and forcing poorer, often Black residents out of their homes and communities. The new arrivals of these transitions are more often moderate- to upper-income Whites, and are invariably persons who do not preserve, support, or value the community culture or residents that they have uprooted.”

CMB is looking at ways in which it may preserve the neighborhoods it operates in with its donation-supported buy-back campaign, acquiring properties and land to preserve against potential developments.