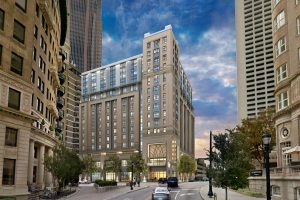 2 min read October 2019 — With 130 new hotel constructions planned across Metro Atlanta, the city now ranks fifth in the country for new hotel construction. The momentum generated from this year’s Super Bowl seems to have continued as the city now looks to attract other major sporting events, such as World Cup 2026 after it made the shortlist as a potential host city.

“Atlanta’s standing as a preferred site for major sporting events has been enhanced by the 2017 opening of the state-of-the-art, $1.6-billion Mercedes-Benz Stadium, as well as the opening of SunTrust Park and the conversion of Turner Field into the new Georgia State Football Stadium,” said a report by the Hotel Valuation Index (HVI).

And Atlanta doesn’t just draw visitors for sporting events. Hotels are now incorporating convention centers as standard to provide the greatest value to customers. “In recent years, the city’s large amount of meeting and event space at competitive price points has advanced Atlanta’s position in citywide convention cycles and has improved the city’s standing in relation to other large convention markets,” said the HVI report. “Increasing convention demand will continue to be supported by the ongoing $55-million expansion of the Georgia World Congress Center (GWCC) and the 2019 announcement of a 1,000-room Signia Hilton convention hotel to be located adjacent to the GWCC.”

Of the 107 projects tracked by real estate firm CBRE, 15 are located in downtown Atlanta, 14 are in Gwinnett County, 11 are in Cobb County and a further 13 are located along the corridor of the GA-400 freeway.

As the competition heats up, hotels need to evaluate their offering to ensure they are in the best position to attract new clientele. Most recently, luxury hotel chain Kimpton jumped on the bandwagon and partnered with developer Portman Holdings and leading hospitality firm IHG to build new properties in Atlanta and Houston. The 216-room Kimpton Buckhead hotel is slated to open in the second half of 2020 and will feature a restaurant and bar, courtyard, private pool and a rooftop lounge.

“We’re thrilled to expand our presence with a second Kimpton hotel in the Atlanta market,” Mike DeFrino, Kimpton Hotels & Restaurants’ CEO, said in a statement. “The partnership with Portman Holdings allows us the perfect opportunity to bring Kimpton to the stylish Buckhead neighborhood and to continue consolidating our presence in the Southeast at-large.”

Developers in Buckhead also are targeting what they describe as the hotel market’s “white space,” or those customers willing to pay $250-300 per night for a room. While luxury hotels in Atlanta command an average of $227 per night, other neighborhoods can attract rates of more than $350 per night. “So, the white space occurs between that $350 and the $225 rate that is prevalent in all of the other hotels in Buckhead,” Regent Partners President Reid Freeman told Bisnow. “There’s $125 worth of white space that no one is capturing.”

Next month, the company is expected to break ground on a $90 million boutique hotel in the Buckhead Village district, to be operated by Thompson Hotels. Buckhead is also a target for Songy Highroads, which is planning a $75 million Hyatt boutique hotel targeted to millennials. “The experiential factor is becoming more prominent. You have different segments of travelers, from millennials to people aging into retirement. They are looking for an experience and place that is a reflection of the surrounding community,” Songy Highroads CEO David Songy told Bisnow.