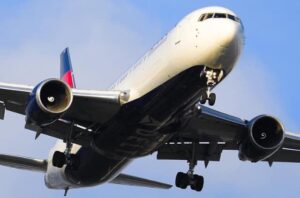 2 minute read March 2021 — With Atlanta set to out-pace the national COVID-19 recovery rate, the city and the airline industry based there have seen sustained investment in anticipation of a strong post-pandemic recovery. Whether on the ground or in the skies, the industry is looking up.

The centerpiece for the sector in Atlanta is Hartsfield-Jackson International Airport. In 2020, the pandemic dealt the airport a heavy blow, with passenger numbers down down 60% to 42 million. At the outset of 2020, the airport had expected another record year, with 113 million passengers estimated to traverse its hallways. With passenger traffic decimated, the airport has become a springboard for expanded cargo operations, announcing it would move forward with its plans for a new cargo building, in addition to a $100 million electrical-systems upgrade,

While passenger flights remain understandably down, the demand for cargo flights, a side-effect of the explosion of e-commerce in the pandemic, has remained high. United Airlines announced the expansion of a new cargo route from Atlanta to Frankfurt, Germany in order to meet the growing demand — demand that led Delta to resume cargo flights along the same route earlier last year. Critically, the surge in e-commerce and the accommodations airlines have made to tap into it demonstrate a bullish attitude toward post-pandemic spending.

Optimism for an increase in passenger demand also appears to be on the rise. When Delta published its 4Q20 and full-year results (a record loss) in January, it declared a return to profitability by the second half of 2021. The airline was the first to establish flights to Europe out of Atlanta, incorporating rapid-COVID tests and “quarantine-free” flights. Delta CEO Ed Bastian believes the airline is well positioned to return to pre-COVID level bookings. His view is supported by an American Express survey in which about 70% of respondents said they expect to travel in 2021 after being homebound in 2020.

In anticipation of those numbers, airlines have been busy. While Delta was among the first to re-open select international flights, others also have established new routes or expanded their cargo operations in the area.

Frontier Airlines, a low-cost carrier, announced a new planned home-base for Atlanta after celebrating the opening of its new Tampa expansion. “Any time we add a new crew base, it is an indicator of continued growth for our airline and also welcomed news for our crew members, who gain a new home base option, and local communities that reap the economic benefits,” said Frontier CEO and President Barry Biffle.

While airlines are already jockeying to see which among them will be able to resume regular operations in full, airline servicers are looking to hitch a ride along with them. Locally-based The Maintenance Group, an airplane repair, manufacturing, and maintenance company that services Gulfstream G-series and Bombardier Challenger series-planes — notable for their use as company planes and in chartered services — was purchased by Illinois-based Elliott Aviation.

In a prepared statement, Elliott Aviation CEO Greg Stahr announced the acquisition as the result of a year-long desire to increase the company’s footprint in the Southeast region, viewing the move as a necessary step in its plan to expand to new markets and viewing Atlanta as the best place to do so.

With airlines opening new routes, airline servicers and plane manufacturers expanding into the city, and the airport’s massive electrical-systems upgrade underway, it’s possible that the aviation industry’s wings won’t remain clipped for long. That would be good news for another hard-hit industry: tourism and hospitality. The increasingly rapid rollout of the COVID-19 vaccine is also providing reason for optimism, for both industries.