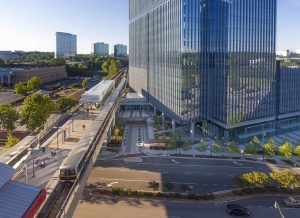 2 min read July 2019 — Atlanta has not been known for its walkability. According to the Walk Score – a score that determines how pedestrian-friendly a city is – Atlanta ranks 21st among large US cities with a score of 49 out of 100. That is well below No. 1 New York City, which scored 89. But as the host of the 2019 Super Bowl earlier this year, the Georgia city took ownership of its connectivity issues and now has ambitious new plans.

Although most sports arenas are located a fair way outside a city’s core due to obvious space constraints, the 62,350-square-foot Mercedes-Benz Stadium is located just a 20-minute walk from downtown Atlanta. The stadium is within walking distance of 10,000-plus hotel rooms and 10 major attractions, which was a huge added value for the NFL when selecting its host city.

“One of the things that has made this Super Bowl special is just how walkable and compact this town is,” Peter O’Reilly, NFL senior vice president of events, told Saporta Report. “People are able to move so easily throughout the campus. It is as compact a Super Bowl campus as we have seen in recent years.”

But while the Super Bowl was a resounding success, Atlanta’s walkability is still a controversial topic. Problems plagued the Northside Drive pedestrian bridge, built specifically to safely connect the city’s downtown with the stadium. The bridge’s costs spiralled and ultimately, its usefulness was limited because it had to be closed to the general public during the Super Bowl due to safety concerns.

Atlanta Mayor Keisha Lance Bottoms says she knows there is more opportunity. “We are getting better by the day,” she told Saporta Report. “While we haven’t always been considered a pedestrian-friendly city, whenever you have an event downtown, we have a walkable area.”

In April, the Atlanta City Council adopted a resolution to become a participating jurisdiction in the Atlanta Regional Commission’s Livable Centers Initiative feasibility study for the AeroATL Greenway Development Plan. The Atlanta mayor’s office pledged $20,000 to support the 1-mile pilot project, an amount that will be matched by each participating jurisdiction. The developers Aerotropolis Atlanta Community Improvement Districts (AACID) and Aerotropolis Atlanta Alliance pledged $80,000.

“This initiative will begin the process of connecting the City of Atlanta to surrounding cities and the world’s busiest airport by way of greenway,” District 11 Councilwoman Marci Collier Overstreet said in a press release.

The plan will be interlinked with Atlanta’s Transportation Plan, adopted by the City Council in 2018, which prioritizes the construction of high-quality sidewalks and bike infrastructure to facilitate access to transportation, retail, and the community.

At the moment, the initiatives are in their infancy, but Atlanta increasingly is recognizing a need to connect in a more innovative way. Hartsfield-Jackson is the busiest airport in the world, with more than 107 million passengers in 2018, and with the Greenway Development Plan, it will soon be one of the most accessible by bike.

“The AeroATL Greenway Plan supports the ability to bike to schools or jobs, walk to downtown restaurants and shops, and – most uniquely – bike directly to the airport for a trip,” says the plan’s executive summary.

To find out more, visit the below: