Atlanta sees growth as an epicenter for the financial industry

Atlanta sees growth as an epicenter for the financial industry 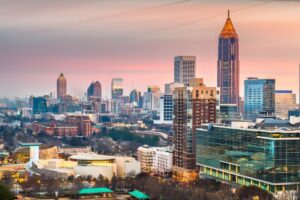 BankUnited N.A., a subsidiary of Florida-based BankUnited Inc., announced in April plans to open a new corporate office in Atlanta, as the bank continues efforts to expand outside of Florida and New York. The new Atlanta office is located at 3500 Lenox Road, according to a company news release. At the end of 2021, BankUnited N.A. had $35.8 billion in total assets.

Atlanta-based Truist Securities also just announced plans to relocate its headquarters and move 1,000 jobs from its current office in Buckhead to The Battery, as the company expands into a newly-built tower with double the square footage, according to the a company press release. The new tower is expected to be finished in 2024.

Even smaller players are expanding, with locally-owned First National Community Bank planning to expand its presence in Paulding County and Cobb County, according to the Rome News-Times. The expansion comes after success in the bank’s small business loan section. Currently, the bank has seven branches and three mortgage and loan production offices located throughout northwest Georgia and in Chattanooga, Tenn.

The city’s financial services market is not only booming, but it is also increasingly diversifying. Atlanta’s fintech sector is one of the top in the world, for example, and continues to attract leading investment firms that are keen to invest in startups. Globally, about 70% of all credit, debit and gift card “swipes” are processed through a Georgia company, according to the Metro Atlanta Chamber, with more than 160 fintech services companies located in the state. And the city continues to be a leading place for fintech startups to get off the ground, thanks to its thriving financial services sector, with firms like Atlanta-based Panoramic Ventures (d/b/a BIP Capital) continuing to invest in local fintech startups.

Capital One announced in March that it was adding hundreds of jobs in financial technology in its Atlanta office, with jobs to focus on engineering positions in the cloud, data management, machine learning and cyber security, according to the Atlanta Business Journal. The company’s Atlanta office is planned for Ponce City Market.

Other recent expansions in the market include Visa Inc., which announced in December 2021 plans to add a 1,000-person office in Atlanta’s Midtown. Visa said a primary driver for its decision is Atlanta’s well-established reputation as a FinTech hub and its diverse workforce, according to a company news release. Visa plans to invest $31.9 million in its planned new office at 1200 Peachtree Street.

“Atlanta represents an epicenter of financial technology expertise, resilient entrepreneurs, diverse perspectives and a vibrant community culture,” said Michelle Gethers-Clark, chief diversity officer and head of corporate responsibility for Visa in the company press release. “We are committed to investing in and supporting the robust talent pool in Atlanta with rewarding professional development and growth opportunities.”