Atlanta on track for full jobs recovery by 2022: UGA

Atlanta on track for full jobs recovery by 2022: UGA 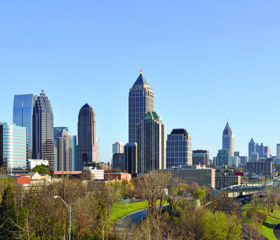 2 min read January 2021 — Georgia’s economy, including Atlanta, is nearly 100% recovered from the COVID pandemic in terms of GDP but a return to normal employment levels will take until 2022, according to Jeffrey Humphries, Director of the Simon S. Selig, Jr. Center for Economic Growth.

Discussing the University of Georgia’s (UGA) economic outlook report for 2021 in an Atlanta Business Chronicle podcast, Humphries pointed out it was mostly high-skilled jobs that were returning while so-called “high-contact” jobs, such as those in restaurants, remained weak. “One thing that will change once we get that vaccine is that those high-contact industries are going to come back. Right now they are mostly significantly understaffed and so we could see a massive surge in hiring,” he said.

The combination of Atlanta’s strong, recession-resistant industries and the release of a vaccine make it likely that Georgia’s employment rates will recover quicker than other parts of the nation. According to the UGA report from the Selig Center for Economic Growth, employment rates in Atlanta, along with the rest of Georgia, should be nearly completely recovered by 2022, while the rest of the nation will likely be waiting until 2023. Other universities in high-growth states, such as the University of Central Florida, are also predicting a similar rebound in employment rates.

Much of the employment struggle is among those working for small businesses. An article in Wall Street Journal laid out the current struggle for small businesses, many of which are in that high-contact group Humphries talked about. It gave the example of Samson Tours Inc. an Atlanta bus operator. Its revenues for the month of December were expected to be less than 10% of pre-pandemic levels and down 75% from the previous month. John Sambdman, CEO of Samson Tours, was forced to lay off over 95% of its employees, according to the article.

However, hope is on the horizon. Starting Jan. 11, the Georgia Department of Public Health began the first phase of the COVID-19 vaccine distribution. All first responders and individuals aged 65 and older are eligible to receive the vaccine. This vital step will help protect the most vulnerable of the population.

Data from the Atlanta Federal Reserve also support the University of Georgia’s outlook for the economy, with its GDPNow rolling estimate suggesting GDP growth of 8.7% during the fourth quarter of 2020. Continued population growth should also underscore the economy, which is fueled by Atlanta’s booming fintech, logistics, healthcare and education sectors. The Metro Atlanta Chamber of Commerce estimates a 10.4%opens PDF file increase in Atlanta’s population from 2018 to 2025.