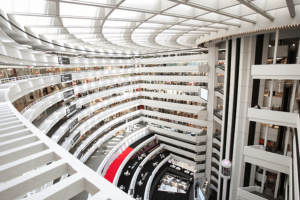 2 min read January 2021  —  The Atlanta Gift and Home Market at AmericasMart marked the slow and steady transition back to in-person markets. After its summer hiatus, the market welcomed vendors and customers at about 50% attendance this month, and many vendors say their modest expectations were exceeded.

“After the first two days, I had run out of order forms,” said Rick St. Angelo, founder of holiday décor brand Standing Stocking by 2 Saints. “I’ve surpassed my numbers from last January already and I haven’t counted it all up yet.”

The layout of the trade show, throughout 7 million square feet of three massive buildings up to 23 stories tall, spread vendor booths widely to maintain distance. The show also took place over eight days instead of the typical five. Bob Maricich, CEO and president of International Market Centers and AmericasMart, said he wanted to exceed the CDC protocols and would ask people to leave if they refused to comply with them.

“During the ingress and egress to the building, social distancing is required. In the elevators, through escalators and the best part, we spread out people over 7.5 million square feet,” said Maricich.

Mask wearing, temperature screenings and hand sanitizer stations prevailed, and video selling sessions and electronic order taking offered a safer avenue for vending. However, the event made many optimistic that, coupled with the rollout of COVID-19 vaccines, the critical industry will return to a state of normalcy soon. At the very least, the Atlanta Market provided necessary temporary financial relief to hospitality and tourism. The market was the biggest boost since March.

“Over 20,000 hotel rooms that we booked over an 8-day period that is projected to generate $36 million dollars in economic impact,” said Mark Vaughan, executive president of the Atlanta Convention & Visitors Bureau.

After March, 29 large conventions and 300 other events booked through the Atlanta Convention & Visitors Bureau were canceled, in addition to the NCAA Final Four men’s basketball tournament, Atlanta United soccer games and concerts. The visitors bureau estimates this lost Atlanta’s economy $10 million and lost the hospitality industry 75,000 jobs. The hospitality industry still does not predict a complete economic recovery until 2023 or 2024.

Only 10 of the 38 convention bookings this year in Atlanta have canceled, said William Pate, CEO of the visitors bureau.

Wakefield Research, an international market research firm, forecasts a decline in market shows to showcase new products in favor of digital platforms. The shows are costly to host and to travel to, and they limit the engagement to who can attend physically.

Others, like Jeff and Tina Salmans of West Virginia, will continue to gravitate toward in-person purchases.

“We like to touch it and see it before buying,” said Tina Salmans of making purchases for her gift shop.

Buying activity at the Atlanta Market was unsurprisingly strongest in stay-at-home product categories like home entertaining, outdoor, kitchenware and candles. Brands estimated 70-80% of their traditional order volume at market, with average order sizes growing 15-50%. Most retailers were specialty independent at the markets, as many large companies still are restricting or banning employee travel to trade markets.

The next Atlanta Market will take place July 13-19, with temporaries running from July 14-18.