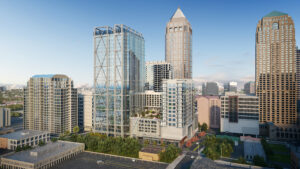 2 min read, March 23, 2021 – With an eye on the city’s affordability mandate, a planned apartment tower along Atlanta’s popular Eastside Trail may feature rents as low as $900, well below the $1,200 a one-bedroom normally gets in the area.

While the low-rent plan is unusual and limited in scope to just some of the tower’s 160 units, it arrives at a time when the Atlanta housing market risks outpacing its residents ability to afford a home commensurate with their income.

The city has mandated in recent years that housing and future developments be made more affordable, with 15% of units being set aside for households at-or-below 80% Atlanta’s Median Income (AMI), which the Department of Housing & Urban Development (HUD) says is $69,700. Proponents of the mandate say it is a necessary step to offset the rapid gentrification of the city, part of a trend as companies relocate during the pandemic or seek to expand into newer markets.

One such example is the announcement of Microsoft’s new 90-acre campus in the Westside Park neighborhood. Fears of displacement and a rise in rents have grown, while calls-to-action have gotten louder and local officials have responded by rezoning land around the fastest-growing areas with inclusionary policies.

The purpose of inclusionary zoning policies is to support mixed-income communities, attempting to reduce the number of households that spend more than 30% of their income on housing. For its part, Microsoft announced that 25% of the campus will be set aside for affordable housing.

Between Microsoft’s new campus, the explosion of development catalyzed by the city’s’ BeltLine trail, the neighborhoods developing alongside it and the changes brought on by remote work and the pandemic, Jamestown’s planned commitment to affordability may seem unusual, but not unwarranted, arriving as developers look for creative solutions and city officials acknowledge the role the city has played in rising rents through their own investment.

“Hopefully (we) can curb some of this gentrification that’s occurring in these neighborhoods, due to the city’s own doing,” Councilmember Dustin Hillis said at a Monday city council meeting over Westside Park rents. “We’re grateful we’re going to have the city’s largest park over there, but we have to address other things such as planning, zoning and transportation as well.”

The developer of the apartment, Jamestown, is the owner of Ponce City Market, a mixed-use project where the average rent begins at nearly double the planned development. The current valuation of the property is at about $1 billion. In addition to residential units, the project provides office space for media and tech companies while also hosting the cities’ largest food hall.

While Jamestown’s proposed apartment tower is not an expansion to Ponce City Market, its connection to it through the BeltLine contributes to the development’s feasibility. “The BeltLine obviously, particularly in the Old Fourth Ward, has been able to get rent premiums just because of the location,” Chris Hall, managing partner of Haddow & Company, said in an Atlanta Business Journal Report. “Hopefully the rents Jamestown can get in that location can help offset some of that effort.”

Jamestown plans to build the 160-unit apartment building on top of an existing 8-story parking garage near North Avenue Plaza, a community and retail area adjacent to the popular Eastside Trail where more than 2 million people visit annually.

“I think it sets a good precedent for other developers to try to follow,” said Hall. “Whether other people can replicate that, I don’t know. The fact Jamestown is doing this is certainly commendable.”