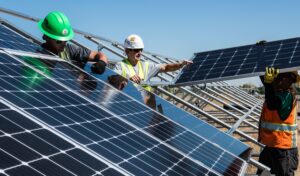 2 min read April 2021 — Atlanta and other cities in Georgia, such as Savannah, Athens, Augusta and Clarkston, are pushing toward their goal of 100% clean energy by 2050, with Atlanta having been the first to commit to the initiative. The goal has helped spark a great deal of recent activity in Georgia’s clean energy sector, specifically regarding solar and nuclear energy.

On March 30, Gas South announced, “an investment goal of $50 million in solar energy by the end of 2023, as part of the company’s plan to support renewable energy initiatives.” Kevin Greiner, Gas South’s president and CEO, said the move is part of the company’s desire to do more for coming generations. “In addition to the charitable giving we do, our pledge to ‘Be a Fuel for Good’ also means doing our part to build a sustainable future for our children and future generations. To show our commitment, we have invested $17 million in solar energy projects thus far and look forward to further expanding our efforts.”

One factor that has allowed companies like Gas South to pursue alternative energy options is the reduced cost, particularly in solar. “Solar has become so much more cost-effective in recent years,” Greiner told Focus: Atlanta 2020.

The cost of solar has dropped approximately 70% over the past decade. As a result, solar has become a significant tool in the fight to achieve 100% clean energy. The declining price can be attributed to better solar panel efficiencies as manufacturing processes improve and technological innovations are implemented. Swanson’s Law, the observation that the price of solar panels tends to drop 20% for every doubling in global solar capacity, explains this phenomenon well.

In another sign that solar is on the rise, Powerhome Solar, an installer of residential and commercial solar panels across the country, is expanding its operations in metro Atlanta. “We’re excited to offer Georgia residents a supplement to grid energy,” Jayson Waller, CEO of Powerhome Solar, stated. “Expanding into Georgia means offering consumers a way to potentially cut costs on their electric bill, as well as reducing their carbon footprint through a renewable energy source.”

According to the most recent estimates by the U.S. Energy Information Administration (EIA), renewable energy, including hydroelectric power, contributed nearly 9% of Georgia’s utility-scale generation, and the state’s nuclear reactors accounted for 26%. In 2018, 35% of Georgia’s energy was considered clean.

Not only are new solar projects underway, but nuclear projects as well. According to the EIA, there are two new nuclear reactors under construction at Georgia’s Vogtle nuclear power plant that will nearly double the plant’s generating capacity. The reactors have planned startup dates for 2021 and 2022. Once complete, the Vogtle site will produce enough clean electricity to power 1 million Georgia homes and businesses. They will be the first new nuclear units built in the United States in the last three decades. Currently, Georgia is home to two nuclear facilities: Hatch and Vogtle.

With so many significant clean energy projects being completed in the state, the push is on for Atlanta and its neighbors toward their target of 100% clean energy.

Photo by Science in HD on Unsplash