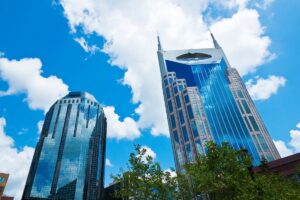 4 min read November 2021 — After months of negotiations, the House of Representatives has passed 228-206, the $1 trillion infrastructure bill, with the President’s signature being the only remaining stamp of approval. It is estimated that Tennessee will receive nearly $8 billion from the package. The passing of this bill has further fueled the conversation surrounding infrastructure needs in Middle Tennessee and how the region is addressing those needs.

Nashville has quickly become one of the most desirable markets in which to reside and do business, and with that has come a greater strain on the region’s infrastructure. “With every announcement that brings jobs, those workers need a place to live, water to drink and all those sorts of infrastructure services that go along with them locating here,” Bob Higgins, president and CEO of Barge Design Solutions, Inc. told Invest:.

Higgins also explained where he has seen the greatest demand as the region strives to meet its infrastructure needs. “As we recover from the pandemic, the water, wastewater and stormwater market is surging, primarily for the purpose of accommodating growth and new opportunities. The transportation market is also incredibly busy.”

Seated in one of the fastest growing counties in Tennessee, the City of Lebanon is a major contributor toward this demand of underground infrastructure. The city’s Mayor Rick Bell stated to Invest:, “When people think about infrastructure, they think about roads and things they can see. Right now, we’re really focused on what’s underground, our sewer system, water system and gas system. It is important to expand and maintain these pieces of infrastructure to accommodate the growth we’re experiencing.”

He went on to touch upon his excitement for the federal infrastructure package, “The federal government recently approved funds to help with infrastructure issues, and although we haven’t received those funds yet we’re looking forward to utilizing them.”

The increasing strain on school infrastructure has also been a challenge for the region. Bill Ketron, county mayor of Rutherford County, explained to Invest: that this is one of their most pressing infrastructure needs. “Our educational system consumes two-thirds of our entire county budget, as it does in the city where they have a separate school district. When you’re averaging 28 people a day moving into your community, that averages 2.4 children per household. We’re looking at almost a school a year to answer the number of homes purchased last year alone in the county. When you’re paying $78 million for a new high school with all the bells and whistles, the track and football field, the gymnasiums and classrooms and acquiring the property, it puts a lot of strain on your tax dollars,” Ketron said.

This strain on the school system infrastructure was recognized in the capital spending plan released on Oct. 22 by Mayor of Nashville John Cooper. The plan includes $134 million for the purpose of creating five new schools to meet increasing school capacity needs and fully funding Metro Schools’ $85 million in priority requests for repairs and upkeep at more than 100 facilities citywide, regarding projects such as playground fixes, computer replacements and new buses.

Transportation is another significant part of the infrastructure puzzle, with various cities within the Middle Tennessee region taking significant steps to mitigate the plague of increasing traffic. Joe Pitts, mayor of the City of Clarksville shared with Invest: that, “The city has undertaken a comprehensive transportation plan, with our No. 1 issue being traffic. We want to make sure that we’re paying attention to that as our population growth demands it. We have identified the need for $500 million for the projects that we’re going to undertake over the next 10 to 20 years, depending on how quickly we can get them done.

Mayor Cooper also announced a significant investment in transportation in his capital spending plan, within which he devotes $141 million, leveraging up to $199 million in state and federal grants, to improve transportation infrastructure.

The federal infrastructure package plans to facilitate clean water access, high-speed internet access, improve roads, bridges and transportation options, upgrade airports, invest in passenger rail, create a national network of electric vehicle (EV) chargers, upgrade power infrastructure and reduce pollution. Many of these priorities overlap with the infrastructure needs of Middle Tennessee, and there may even be new opportunities presented for the region on the horizon.