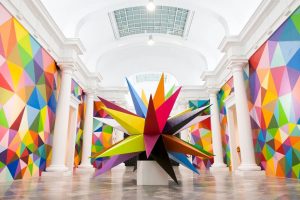 2 min read December 2019 — Art Basel is in to town. When Swiss art dealers Ernst Beyeler, Trudl Bruckner and Balz Hilt began the show in Basel, Switzerland, in 1970, it was a cult hit. As the art fair gained momentum over the years it added two additional venues – Hong Kong and Miami Beach. Now, Art Basel Miami Beach brings the city to a standstill.

Started in 2002, the Miami Beach show itself draws in 70,000 visitors per year, 4,000 artists and over 250 of the world’s leading galleries participate. For those galleries accepted to exhibit in the main Art Basel space at the Miami Beach Convention Center, the cost starts at $100,000. Miami Beach also attracts over 20 satellite fairs, and there is so much art buzz around town during the dates that the week is now known as Miami Art Week. Tickets are available at $65 a pop, but for many, that’s a steal to access so many world-class artists all in one place.

Art Basel has played a significant role in democratizing access to these works of art and providing exposure for up-and-coming artists. In the 1980s, for example, the global art world was but a tiny network. “We knew every collector in the world then. Ninety percent of them were in New York or Germany,” collector Don Rubell told The New York Times. But now, times have changed. “Miami is not just bikinis and muscles anymore.”

UBS and Art Basel research shows that the global art market hit $63.7 billion in sales in 2017, with the United States the largest market, accounting for 42 percent. Art Basel Miami is responsible for about 10 percent of domestic sales, Alexander Forbes, executive editor of the art news website Artsy, told Marketplace. “$2 billion to $3 billion worth of art is usually on view,” he said.

Rubell and his wife Mera were instrumental in convincing Art Basel to set up shop in Miami in the early 2000s and the family collection now occupies a whopping 100,000-square-foot campus in Allapattah, which they purchased for $4 million. At the same time the Rubells purchased the plot, they bought a neighboring piece of land for $8.6 million.

According to Esther Park, a regular on the Miami art scene, Miami has just the right features to make it a haven for an event like Art Basel. “Miami was always going to blow up eventually,” she told Miami New Times. “It’s just that Basel propelled it.”

Samuel Keller, Art Basel’s director, acknowledged in an interview with The New York Times that Miami was a risky choice, but that it had all the ingredients for success. “Here there is a huge potential, economically but also culturally,” he said, calling the city “the gateway to Latin America, a melting pot of minorities from European to Jewish to gay.”

The four-day extravaganza attracts the most prestigious art buyers from all over the world, who enjoy splashing out. The trade fair has partnered with several major hotels in the area to offer preferential rates for attendees, but to stay in The W South Beach, The Standard Spa, Miami Beach or Nautilus by Arlo, prices still start at $422 per night and go right up to $1,650.