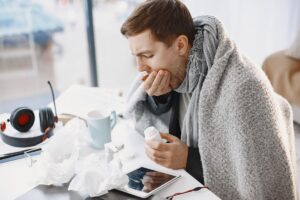 On Monday, the National Bureau of Economic Research published a study that estimated COVID-19 illnesses reduced the U.S. workforce by 500,000 people. The figure highlights the industries that have been affected by the labor shortage — giving some workers more leverage to negotiate better benefits in the current market.

One recent example was the tentative agreement reached between the country’s railroad union representatives and railroad companies, which included the ability to take time off for medical care without being subject to restrictive attendance policies.

Since 2008, 17 states as well as several cities have enacted PSL mandates to varying degrees. According to a medical study published by the American Journal of Preventive Medicine in August 2022, a 40-hour annual PSL requirement may bring mortality rates down by more than 5% in large central metro counties.

“Even before the pandemic, dozens of successful efforts by state and local advocates to pass paid sick days laws showed the strong demand for this policy. With the pandemic making it all too clear why workers and businesses need paid sick days, we expect even more workers to take up this issue,” National Partnership For Women and Families’ Vice President for Economic Justice Sharita Gruberg told Invest:. The Washington D.C.-based non-profit advocates for affordable, quality healthcare and other focus areas.

“State and local legislation is one path – as shown by Colorado, New Mexico, Allegheny County in Pennsylvania, and Bloomington in Minnesota, all of whom passed paid sick days laws during the pandemic. But we are also seeing non-legislative paths such as shareholder advocacy and collective bargaining — as we’ve already seen with the centrality of paid sick days in the railroad workers’ near-strike. (The tentative agreement between the railway unions and management did not include paid sick days, but did remove attendance penalties for taking time off for certain medical events.),” said Gruberg.

While PSL has been pushed forward in the western and northeastern parts of the U.S., southern states have been more resistant to requiring PSL and paid family and medical leave (PFML) — some even barring cities from passing related policies.

In March 2022, Tennessee lawmakers removed legislation from the agenda that would have created an employee-funded PFML insurance fund. The plan, called the Tennessee Family Insurance Act, would have allowed Tennesseans to have up to 12 weeks of paid leave to care for a new child, seriously ill family member, or recover from their own serious illness.

“An employee-funded paid family & medical leave program is a win-win for Tennessee families, businesses, and the economy,” said Feroza Freeland, policy manager of the Southern Office at A Better Balance, in a press release following the announcement. The advocacy organization said that 84% of state voters were in support of creating an insurance plan to help with PFML for employees, according to a July 2020 survey.

Businesses in Music City are exploring ways to best utilize benefits in order to stay competitive in the current labor market. “There are a lot of companies looking at what is more in line with demands and what is right culturally to be doing,” Nashville-based Tuck-Hinton Architecture & Design Principal and Owner Mary Roskilly told Invest:. Roskilly noted that her company is still deciding how to best organize emergency leave so employees can make the most of it. “But being a small business, you have to look at if it is viable.”

“One of the biggest hurdles is businesses’ fear — often stoked by opponents of the policy — of this policy hurting their bottom lines. Fortunately, there are reams of evidence from states and localities with paid sick days laws showing the exact opposite: not only are these policies not harmful, but businesses stand to reap significant benefits such as improved retention, higher productivity, better workplace safety, and more,” Vasu Reddy, senior policy counsel for economic justice at the National Partnership told Invest:.

“As more businesses and governments continue to adopt paid sick days, more and more evidence will emerge that paid sick days are a win-win for workers, businesses, and communities,” Reddy added.