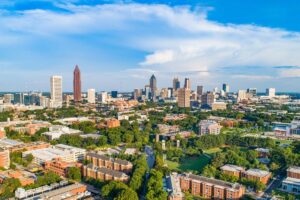 Georgia had some of the highest rent price increases in the country for 2021, with a survey conducted by LendingTree showing that average rent for a one-bedroom apartment in Georgia went up 22% from 2019 to $1,195. Nationally, rent prices are expected to surge 13% for 2022, according to Texas-based RealPage Inc.

Data compiled by The Atlanta Regional Commission shows that the housing market has the lowest supply levels on record, and the market — driven by COVID-19 and the changed ways of life during the pandemic — highly favors the needs of high-income households both in Atlanta and across the nation. Affordability for homeownership is an issue in Atlanta, with homeownership rates going down. In the last five years, home values in Atlanta have increased by over 74% for a single-family home, with the median listing price at $399,000, according to data from Realtor.com.

The Atlanta Regional Commission projects that 4,700 new affordable apartment units will need to be constructed annually to address the needs of households earning less than 70% of the region’s median income. In another study, House ATL has recommended that $1 billion in funds be raised through public and private means to create and renovate 20,000 affordable housing units over the next decade.

As renting and the costs of homeownership have increased, so have evictions. From 2015 to 2017, Georgia’s eviction rate was among the worst in the nation at 5.7%. In Atlanta’s poorer communities, nearly 40% of renters have received eviction notices, according to the Annie E. Casey Foundation.

The City of Lawrenceville — a suburb of Atlanta — is an example for the metro area, with a focus on affordable housing a top priority for city leaders in the years to come, David Still, mayor of Lawrenceville, told Invest: in an interview.

“We have old housing inventory, and everything has already been built out, so we continually have to remodel. Much of our housing needs to be replaced so that residents can have access to quality housing. One of our goals is to have housing available for all socioeconomic levels,” Still said.

The city has already taken action on the issue, having already received $1.6 million from the American Rescue Plan, with the funds going towards the local neighborhood stabilization program. The goal of the program is to assist residents with housing, including helping with home repairs and bringing older homes up to code. The city has invested $100,000 and the state has allocated another $300,000 for this program, David Still, mayor of Lawrenceville, told Invest in an interview.

Additionally, the area is set to receive about $11 million from the federal infrastructure bill, and the city plans to find ways to further invest in housing, according to Still. Gwinnett County is also on tap to complete the Livable Centers Initiative (LCI) for the Lawrenceville Town Center in Sept. 2022. The Livable Centers Initiative is a program from the Atlanta Regional Commission, which awards planning grants to local governments as they work to improve city centers and corridors. Since 1999, the initiative has awarded $194 million in grants to local communities.

“The results of the LCI will guide the City Council and city staff in their ongoing mission to  improve the quality of our housing, upgrade downtown infrastructure, stimulate economic development, and create jobs,” Still said.

Next steps for the area to mitigate the housing challenges, according to the Annie E. Casey Foundation, should be focused on expanding affordable housing, providing assistance with evictions and increasing protections for renters, and addressing building housing development policy to make homeownership possible.