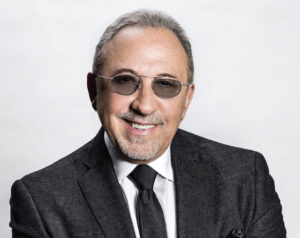 Music from Miami is known for having a distinct sound. How would you characterize this sound?

What makes the Miami sound so different is the fusion. A song may have a Haitian performing on a Haitian guitar and a Brazilian percussionist, while the bass is pop music. You have flavors from everybody – Puerto Ricans, Italians, Jews, Colombians, Brazilians, Mexicans and, of course, the Cubans – and they all bring something to the music. We were influenced by pop music, Motown, disco and the Beatles. At the same time, we grew up listening to Celia Cruz, Cachao, and other incredible Latin musicians.

The Miami sound is also about passion and energy, and at the base of it, this is all about the percussion. Percussion moves people. When I first started out in the business – I am not just a producer, but a percussionist – every time I went to a label, they said the percussion would never work and that I had to take it out. I didn’t want to take anything out.

How does the Cuban-American immigrant experience influence culture and arts in Miami?

Today there are four generations of Cuban-Americans immigrants and everyone has a different opinion, particularly when it comes to what is happening in Cuba. Ultimately, we all want what is best for the people living there. We who left Cuba are never going to go back and live there, but we want the people of Cuba to be free. I was both lucky and unlucky to arrive in Miami when I did. It was a new city, full of opportunities, but we brought in new sounds and ideas that were not accepted at the time. The first thing I was told was to change my name and my sound. That was something I would never do. The immigrant influence on Miami has impacted not only music, but also food. Gloria and I opened Larios on the Beach almost 27 years ago. We wanted to open a restaurant on Ocean Drive that served mojitos and traditional Cuban cuisine. We were told that this would never work – that customers would prefer to eat burgers. Since then it has won awards and become a popular attraction.

How does Miami influence broader cultural trends nationally and internationally?

Miami combines so many unique elements that cannot be found anywhere else in the world. It goes back to the diversity we have – the mix of people, cultures and sounds.

People are crazy about the Miami sound, which has influenced, not only the Miami Sound Machine, but also Ricky Martin, Shakira, Jennifer Lopez, Marc Anthony, Pitbull and Jon Secada, among many others. Miami is a great role model for the rest of the U.S. because although we are a young city, everyone is supportive of one another’s successes. We are a gathering of, not just Latinos, but people from all over the world who have great ideas.