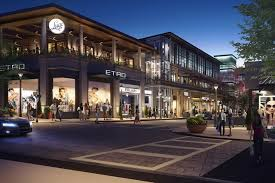 Commentators and analysts are warning e-commerce will spell the death of the shopping mall, but fresh concepts in the retail experience are breathing new life into Atlanta’s brick-and-mortar retail.

Despite worries of a downturn, U.S. retail figures have seen a first quarter boost in 2017. In initial estimates rel

eased by the U.S. Department of Commerce in April, the first quarter of 2017 saw overall retail spending at $1.25 trillion, an increase of 5.1 percent on the same quarter the previous year. However, the increase for online retail was almostthree-times that, at 14.7 percent, reaching $105.7 billion.

Driven by companies such as e-retailer Amazon, which accounts for 43 percent of all online sales in the U.S., e-commerce has been threatening traditional brick and mortar stores for the best part of the past 20 years. In 2007, e-commerce accounted for 3.1 percent of all retail in the U.S.; as of the first quarter of 2017, this figure stands at 8.5 percent. A CNBC report in May 2016 featured retail analyst Jan Kniffen warning almost a third of all enclosed malls in the U.S. were likely to fail in the near future.

The online sphere offers convenience, choice and often greater value for money. With access to the online world growing year-by-year, it’s easy to think that the days are numbered for the traditional shopping mall.

The rebirth of the mall

Not everybody is convinced by the death toll for the mall though, and “experiential retail” is the buzz phrase driving renewed enthusiasm for brick-and-mortar stores. “We shop online out of convenience, but there is still that experiential factor in, for example, buying a nice suit, and you don’t get that online,” Gene Rice, co-founder of Vantage Realty Partners, an Atlanta-based commercial real estate agency told Focus: Atlanta in April 2017. It is this idea of an “experience” that is emerging as a new direction for brick-and-mortar retail in the U.S. One of the leading examples is Ponce City Market, a 16-acre mixed-use retail, office and residential development in Atlanta, Georgia.

Developed by Jamestown Properties, and situated near the Beltline, Ponce City Market reuses the historic Sears, Roebuck & Co building. “We are working to make retail an attractive substitute to online shopping. We try to make our 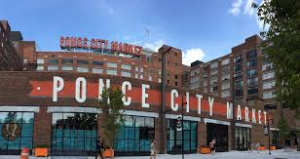 environment surprising, challenging and exciting.” Matt Bronfman, CEO of Jamestown Properties told Focus: Atlanta. The idea of combining popular retail stores with other attractions, such as high-end restaurants, leisure pursuits and even live concerts is one taking off across the state.

“People are getting more creative with their retail and getting people out of their houses to come shop in store. You start to see barber shops and bars. It’s a different experience,” Rice told Focus: Atlanta.

Central to the success of these developments is combination of other aspects of life, such as work, making the mixed-use development the ideal torchbearer for experiential retail. Avalon, developed by North American Properties, in Alpharetta contains more than 100,000 square feet of office space, along with over 300 planned family housing units in addition to its 365,000 square feet of retail. In addition to cinemas, and high-class restaurants the development also offers yoga lessons and play areas.

“We always need to look at how to attract people to our real estate developments. At Avalon, we have been able to create an urban experience in a suburban setting.” Mark Toro, managing director of North American Properties, managers of the Avalon development, told Capital Analytics.

Both Ponce City Market and Avalon work on the central tenant that people want to enjoy the shopping experience. Indeed, an afternoon shopping can still be an event for either the family who can enjoy quality time snapping up the seasons bargains, or the book-lover that gets lost among the shelves of their favorite store. This is a fact that even companies like Amazon cannot deny as demonstrated by their current program of opening physical stores across the country.

While the internet is surely driving one of the largest shifts in shopping habits since the invention of the shopping mall, it seems that for the moment there is still plenty of life in the bricks and mortar retail store.