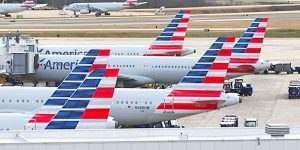 2 min read Feb 2020 — From its strong headquarter relocation culture to its growing population and access to both capital and high-skilled talent, the Queen City has been flying high for several years. Undoubtedly, much of the region’s success can be directly attributed to the Charlotte Douglas International Airport (CLT) and the American Airlines hub that now serves more than 700 daily departures.

The airport is undergoing a $3 billion makeover, modernizing and expanding its infrastructure with American at the center of the renovation efforts. In this process, the airport and American are helping recruit companies to Charlotte and training the next generation of the aviation workforce.

This past holiday season, the airport renovation projects began to materialize as American added four gates on Concourse A to its Charlotte operations. “Charlotte 700” refers to American’s growth strategy in the Queen City and aims to serve more than 700 daily flight departures, a figure which Vice President of Operations Dec Lee said the airline surpassed. “Charlotte 700 refers to our original plan to have 700 flight departures a day, but we are actually over 700 departures a day now,” Lee told Invest: Charlotte. “Every time you want to add options for customers, you have to make sure that you can handle that and still have a great operation. We have a great collaboration with our network team and with the airport to build the right flight schedule,” he said.

The airport and American have been a vital part of the region’s economic diversification success and thriving headquarter relocation culture. “When you listen to some of the corporate announcements explaining why companies have moved here, you often hear about the ability to fly out of the hub. It is a great experience, particularly for business travelers, to be able to fly out in the morning and come back in the afternoon,” Lee said. Charlotte Mayor Vi Lyles echoed Lee’s sentiments. “We have invested heavily to make our airport a transport hub for the region with access to global businesses,” Lyles told Invest: Charlotte.

Charlotte government officials and business leaders have been working in tandem to promote the Queen City as a business destination to local and international companies. One major target sits across the Atlantic. “This year, we will make a concerted effort to reach out to companies in Europe to let them know that Charlotte, thanks to its strong travel infrastructure, is a viable destination for their U.S. expansion,” Lyles said.

For those interested in aviation, mechanics and engineering, American could be a potential job destination. The airline is coming to the end of a labor cycle, meaning opportunities will open for young workers. “We have a population of mechanics and pilots who are beginning to reach retirement age. That is unfortunate for us, but it is a fantastic opportunity to bring new folks into an industry that is doing so well compared to the early 2000s,” Lee said.  Overall, the future looks bright for the next generation of pilots, mechanics, and flight attendants. “You are bringing people into an industry that is growing and vibrant, and these jobs are exciting jobs.”