A blossoming destination for tourism, arts and culture

A blossoming destination for tourism, arts and culture 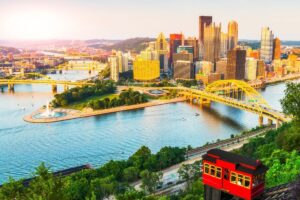 2 min read January 2022 — From its four Carnegie Museums and the Senator John Heinz History Center to one of the top symphony orchestras in the world, as well as renowned opera, ballet, and theater companies, Pittsburgh has blossomed as a top destination for tourism, arts and culture.

“For a city of only about 300,000 people, Pittsburgh is unparalleled in the concentration of institutions that support the arts and culture, and that’s reflected in our very rich cultural landscape,” Steven Knapp, president of the Carnegie Museums of Pittsburgh, told Invest:.

There has been a steady increase in Pittsburgh’s tourism numbers over the past 10 years. According to 2019 statistics, the city attracted 33 million tourists, generating over $6.5 billion in direct spending. Of those visitors, nearly 13 million stayed overnight, with the rest being day visitors.

So, what attracts them to the city? Well, the first and biggest pocket of visitors — eight out of 10 — come for leisure purposes, including cultural events and attractions. Allegheny County alone has over 40 museums and galleries. In 2019, 1.6 million visitors to these museums generated a $140 million economic impact on the region. The Andy Warhol Museum is also the region’s leading attraction for international tourists.

But the region’s tourist attractions don’t stop there. According to Jerad Bachar, president and CEO of VisitPittsburgh, sports tourism is another major driver of the economy. The region hosts a tremendous number of events throughout the year, including the Pittsburgh Vintage Grand Prix. “We host a lot of collegiate competitions, Divisions I, II and III. We also do a ton of youth sports across the county,” Bachar told Invest:.

Sports are a big driver because of the Greater Pittsburgh area’s enviable outdoor space. This has created a trickle-down effect, pushing tourism out to the surrounding areas instead of concentrating it in Pittsburgh alone. Butler County, about 40 miles to the north of the Pittsburgh metro area, has seen tourism activity remain strong throughout the pandemic due to its extensive parks and trail network.

For Tiffany Hernandez, in charge of public relations and communications at the Butler County Tourism & Convention Bureau, the dynamics have changed for many travelers over the past two years. “Once drawn to larger cities and major tourist attractions, travelers are now visiting suburban areas and seeking small-town experiences, which is great for Butler County,” she informed Invest:. “Our small towns are historic and filled with shops, cafes, breweries, trendy boutiques and something for everybody.”

South of Pittsburgh lies Fayette County, which has a population about the same size as the city of Pittsburgh. Previously bolstered by its agricultural offerings, tourism has been playing catch-up and now, agritourism is the buzzword around the region. “We have a very diverse and vibrant agricultural sector in the county,” William Jackson, partner at Jackson Farms, said in a conversation with Invest:. “While some farms are significant in size, we have a lot of small-scale and part-time farms. More and more, we see value-add operations coming about with an increasing focus on agritourism.”

While the domestic tourism industry has powered the region through 2021, in 2022, leaders are hoping for a return in international travel to propel Pittsburgh even further. Travel industry experts are predicting that 2022 may be the year to start planning for trips abroad after two years of uncertainty. According to an upcoming Expedia report on 2022 travel trends, about 37% of U.S. travelers are planning both international and domestic trips next year. And in Europe, 66% of people have planned trips through at least March 2022, and over 50% of respondents in a European Travel Commission survey said they were comfortable with flying again.

For Butler County’s Hernandez, one of the keys for the region’s competitiveness will be working together to attract international visitors. “We work with other CVBs, including VisitPittsburgh, to promote southwest Pennsylvania as one whole tourism destination,” she said. “You can get to different areas within this region very quickly, providing entirely different offerings and experiences.”