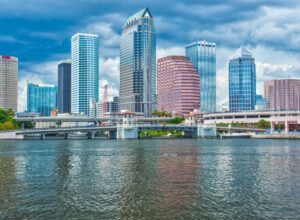 3 min read December 2022 — Tampa Bay’s economy is riding a wave of continued growth into 2023, but addressing challenges related to affordable housing, transit and infrastructure will be key to the region’s sustained upward trajectory.

From record-breaking tourism revenue to a resilient housing market and continued business expansion and relocation into the region, Tampa Bay’s economic engines have been firing on all cylinders this past year. And despite Hurricane Ian wreaking havoc throughout Southwest Florida, the Tampa Bay area was largely spared from the Category 4 hurricane.

From a tourism perspective, visitors couldn’t get enough of those Gulf Coast beaches and main attractions in the region, with Visit Tampa Bay announcing a total taxable hotel revenue of $964 million in the 2022 fiscal year — placing the estimated visitor spending impact at over $8 billion.

“It has been a historic year for Tampa Bay tourism with numbers reaching never-before-seen milestones.  While we are funded on hotel revenue collections, those numbers reflect only a fraction of the economic impact of the industry on our community,” said Santiago Corrada, president and CEO of Visit Tampa Bay.

And as Florida’s leading economy on the west coast gears up for 2023, a robust lineup of conventions will be a key facilitator in bringing more traffic to Tampa, Clearwater and St. Petersburg. “We have laid a foundation of big-time conventions all next summer, on top of leisure travelers and tourists,” said Corrada, as cited by Bay News 9.

Tampa’s international appeal has also been on display, as Tampa International launched a daily Virgin Atlantic route between Tampa and London Heathrow Airport in November. The route further connects Tampa Bay with its neighbor across the pond and the more than 100 Tampa Bay-based U.K. businesses, as cited by The Tampa Bay Times.

The real estate market in Hillsborough County has remained strong despite rising interest rates impacting the market across the country. In the Urban Land Institute’s 2022 Emerging Trends in Real Estate report, Tampa was rankedopens PDF file the top market in Florida for overall real estate prospects, while Tampa and St. Petersburg combined came in at No. 2 in the U.S. for homebuilding prospects.

Relatively affordable housing prices have garnered interest from out-of-state homebuyers while negatively impacting locals. Tampa homebuyers spend 5.5% more of their household income on average on mortgage payments compared to the national average. In terms of rent, Tampa workers on average need to work 20 extra hours to afford rent compared to five years ago.

On the development side, the level of activity has been explosive over the past year, according to The Plasencia Group CEO and Founder Lou Plasencia. “The region is in the top five in the country for hotel transactions, and state-wide, 38% of all hotel deals above $10 million in the United States have taken place in the State of Florida,” Plasencia told Invest: earlier this year.

But much like across the U.S., prospects for homebuilders and developers have been on the decline due to the high cost of land and materials as well as financing. “Multifamily developers are becoming cautious, as supply constraints have caused a large backlog of projects started but not yet completed to accumulate in the pipeline,” said National Association of Home Builders (NAHB) Chief Economist Robert Diez in November, as cited by NAHB.

“An emerging additional constraint is financing for new multifamily development, which 79% of developers say is somewhat or significantly less available than it was a year ago. NAHB is now projecting a significant decline in multifamily starts in 2023,” Diez added.

One of the more exciting projects to watch as 2023 unfolds is the redevelopment of the 86-acre Tropicana Field site, home to the Tampa Bay Rays. The 32-year-old domed stadium and surrounding space were targeted for redevelopment at the onset of the pandemic, and a new request for proposal issued in 2022 just received four proposals from separate groups, including 50 Plus 1 Sports, Hines & Tampa Bay Rays, Restoration Associates and Sugar Hill Community Partners.

According to a statement to the media, Mayor Ken Welch and the City of St. Petersburg will put a heightened focus on affordable and workforce housing, intentional equity, among other areas, when reviewing proposals. The name of the project, Historic Gas Plant District, reflects the site’s historic roots as a predominantly Black district. A final decision will be announced at the Mayor’s first State of the City address at the end of January 2023.

“The challenge in Tampa Bay has been securing local funds. We know how to access federal and state funding but many of these grant programs require a local match,” Tampa Bay Area Regional Transit Authority (TBARTA) Executive Director David Green told Invest: earlier this year. “Unfortunately, it has been challenging throughout all the counties to meet this requirement. It’s crucial that we find a local matching mechanism for all counties in Tampa Bay so we can begin new projects everyone has identified.”

Despite economic headwinds on a national scale and contention over the cost of housing and enhanced transit, Tampa and the region appear well positioned heading into 2023.

“The outlook for the city is bright. We want to become a shining example for other cities worldwide,” City of Tampa Mayor Jane Castor told Invest:.