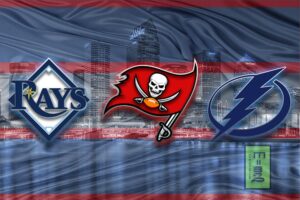 2 min read December 2020 —In a year that many people would prefer to forget, the sports scene in Tampa Bay provided residents a brief reprieve. The combination of championship success and big-name signings by Tampa Bay teams bolstered the morale and local economy of the West Florida city even as the pandemic raged.

To begin with, the city got a new champion. The NHL’s Tampa Bay Lightning were able to pick up right where they left off after the hockey season was temporarily suspended due to the COVID-19 outbreak. The Lightning made the move to Toronto, home of the Eastern Conference bubble, and resumed play over the summer, finishing with an impressive 43-21 record, which earned them the No. 2 seed in their division. Tampa Bay was forced to pack up and relocate again, this time to Edmonton, where the NHL Conference Finals and Stanley Cup were to be played. The changing of cities did not phase the Lightning who put together one of the most impressive playoff runs in the history of the NHL, culminating in the franchise’s second-ever Stanley Cup. Celebrations of the championship were limited, with a 15,000-fan production allowed inside the walls of Raymond James Stadium. Now, with most of the roster returning, the goal is to do what only one team in 22 years has done: win back-to-back championships.

Following the Lightning’s success on the ice, Tampa Bay went to the brink of another championship. This time, it was the city’s Major League Baseball team, the Rays. The team buoyed the city’s hopes when it was crowned champion of the American League and squared off against the Los Angeles Dodgers in the 2020 World Series. Unfortunately, the Rays were not able to repeat the Lightning’s success and lost in a six-game series to the Dodgers. It was the Rays’ second World Series appearance after losing in five games to the Philadelphia Phillies in 2008.

While the Rays’ run to the World Series wasn’t a huge surprise — they were the best team in the American League in 2020 — what happened in football certainly was. Tom Brady shocked the football world in March when he signed a two-year, $50-million contract with the Tampa Bay Buccaneers. His choice to leave coach Bill Belichick and the Patriots dynasty, with which he played in nine Super Bowls and won six, will go down as one of the biggest decisions in sports history. Within days of the announcement, Tampa’s NFL fans showed their tremendous excitement for their new quarterback, making the Tom Brady Jersey the No. 1 seller in the NFL. As the NFL wraps up week 13 of its 17-week season, the Bucs sit in second place in the NFC South with aspirations of a Wild Card Playoff berth and a potential trip to Super Bowl LV. The icing on the cake? Tampa will host the Super Bowl on Feb. 7, 2021.

While Super Bowl LV will likely not produce the nearly $600m economic boost that South Florida saw last year when Super Bowl LIV was played at Hard Rock Stadium in Miami, the local hospitality industry will receive an injection of capital that is much needed after one of the hardest years for the sector to date. A quick hotel search for the weekend shows that options are already scant, largely due to the NFL, corporate sponsors, and other private groups having already drafted contracts requiring thousands of rooms to be blocked off for the weekend. The Super Bowl will only sell 20% of Raymond James Stadium’s capacity but still expects to attract significantly more fans to the area, increasing foot traffic for restaurants and bars in the region.

The city plans on being creative with outdoor space to keep the event fun for those who do attend. Many of the outdoor entertainment options will be anchored around the Tampa Riverwalk. Ultimately, even with the restrictions in place, Super Bowl LV will still provide Tampa Bay hotels and restaurant owners a reason for optimism after the disaster that was 2020.